Painting terrain with a selection circle

I don't mean putting a circle under a unit like done in an RTS, that's fairly simply done with a scenegraph(-like structure). What I'm referring to is selection circles for things like Area of Effects that are painted on the terrain.

It seems relatively simple until I think about it.

Here are some images for reference:

The first image gets the idea across, but not the full scope. Basically, the floor is painted with a decal detailing the region that will be affected by the spell.

The second image gets it across much better, it's not just a flat painted circle, it wraps along the mesh.

At first I figured to use some sort of object selection, and then in the vertex shader draw the texture on the correct vertices based on... some criteria that I'm still working out. Most likely based on distance and angle from the intersection point. The difficulty seems to come in that the methods wrap onto objects that seem to be completely different meshes.

I can't find an image that shows it (and don't play WoW anymore so I can't take a screenshot), but say you have a terrain mesh and a house on top of it and I select a point very close to the house's wall. Instead of continuing on the terrain mesh, the selection circle will go as far along the terrain mesh as it can, and then wrap up onto the wall of the house. It also ignores certain objects (players, etc), but that's pretty easy to ignore with correct collision tags/callbacks.

It's not so much that I can't think of a way to do this, but all the ways I can think of would probably lag your game out or turn your processor into slag. Somehow I have to:

Is there a standard method for this? Am I just overthinking it?

My best guess is rather than do one ray cast and selecting that point as the "center" I do a bunch of casts and in each case select the nearest vertex and bind the appropriate UV coord to that vertex, but it seems messy and potentially performance heavy to select that many vertices that way at the CPU frame-by-frame level. Especially since ray casts in general are expensive, even with a good physics engine.

It also doesn't seem particularly portable to anything other than a selection circle. A similar case would be like drawing the movement arrow over the terrain in Total War games, a thick arrow is drawn between the unit and its destination (see here: http://webguyunlimited.com/pixelperfectgaming/wp-content/gallery/total_war_shogun_2_rise_of_the_samurai/total_war_rots_screenshot_014.jpg ), this would seem to be a very similar technique to the AOE selection circle, but the ray cast method I mentioned wouldn't really work for it. There are, of course, numerous other examples too (such as trajectory markers).

Overthinking is an understatement! In your case it's especially easy, just Offset and Scale.

To get an orthogonal projection looking down Y axis, simply discard Y component. Your (unprocessed) texture coordinate [X,Y] is your world position [X,Z]. Now offset, scale, and limit to control the effect.

Here is a pseudo GLSL example of an effect like the one in your links:

Now for an example: (red X is the selection, blue X is the pixel we are shading) 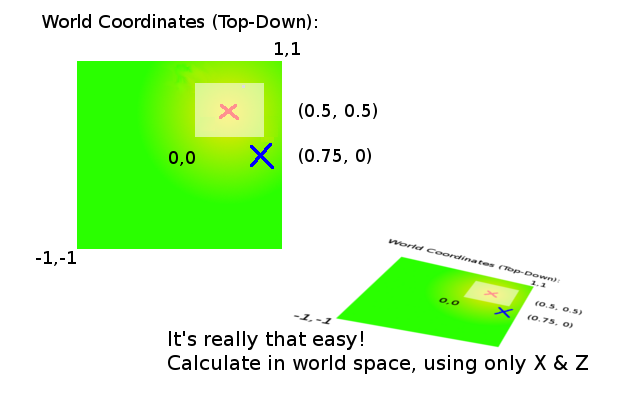 Lets work through some now, we are the pixel shader for the blue X

This gives our texture coordinate as [0.916, -0.3], which has a Y component less than zero, so the pixel is hidden using alpha=0. Although the X component is inside the box, near the edge (as you can see in the picture)

Now lets follow our selection point, which should clearly be right in the middle of the texture:

and again it is

Not the answer you're looking for? Browse other questions tagged textures algorithm rendering or ask your own question.

4
How to draw a circle on the ground like in “Warcraft 3”?

14
How to gain accurate results with Painter's algorithm?
12
Evolving a Terrain Generator
3
Getting one-point-collision object to conform to uneven terrain while keeping constant distance covered
1
finding a path from one point to another with obstacles help
10
How is Signed Distance Field Ray Marching implemented for a dynamic world?
3
Octahedral impostors, Octahedral mapping