How can I animate the stretching of a sprite over time?

My goal is to find the function to stretch a sprite like my example below, and then get it to animate during a certain time. It is like an interpolation, where the starting point is the original image, and the final point is the stretched image. Any idea?

Here is an example, hope it is clear. 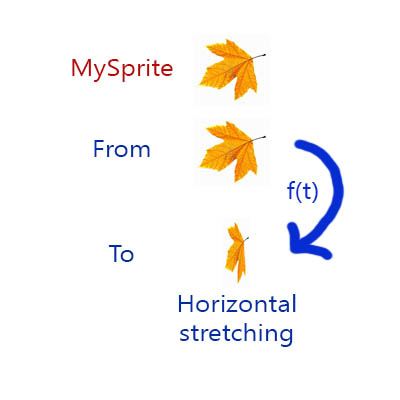 The SpriteBatch class's Draw method has an overload that allows you to specify a scale factor. Thus, to render a sprite in a stretched frame, do something like:

To achieve an animation of this effect, store your scale factor somewhere (a member in your Game class would be simple to start with), and update it over time in your game's Update method. The Update method gives you a GameTime object containing the elapsed time since the last update. Every update, adjust your scaling factor by the amount you want to scale per second using the TotalSeconds member of the elapsed time span object.

Not the answer you're looking for? Browse other questions tagged xna-4.0 animation or ask your own question.

2
cocos2d: syncing CCAnimation frames with Box2d Shape manipulations
0
XNA Sprites Not Drawing Correctly
3
How to position a sprite in a 2D animation skeleton?
3
How do I tile a specific region of a sprite?
1
Use FlxAnim to Animate a FlxSprite in Flixel on FlashBuilder
0
How do I cycle through a BufferedImage array of images and display them?
5
How can I interpolate between two frames of a sprite-based 2D animation?
0
Ease out elastic function with equivalent start and end values?
3
How can I have realistically bending/flexing paper?
24
How to animate abstract 2d top down water texture?