In XNA, how do I dynamically load parts of a large 2D world map?

I want to develop a huge world map; at least 8000×6000 pixels in size. I have broken it into a 10×10 grid of 800×600-pixel PNG images. To avoid loading everything into memory, the images should be loaded and unloaded depending on the player's position in the grid.

For example, here is the player at position (3,3): 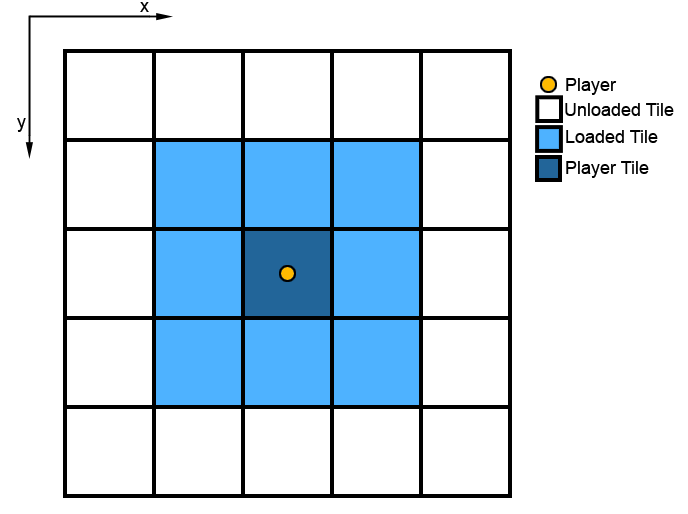 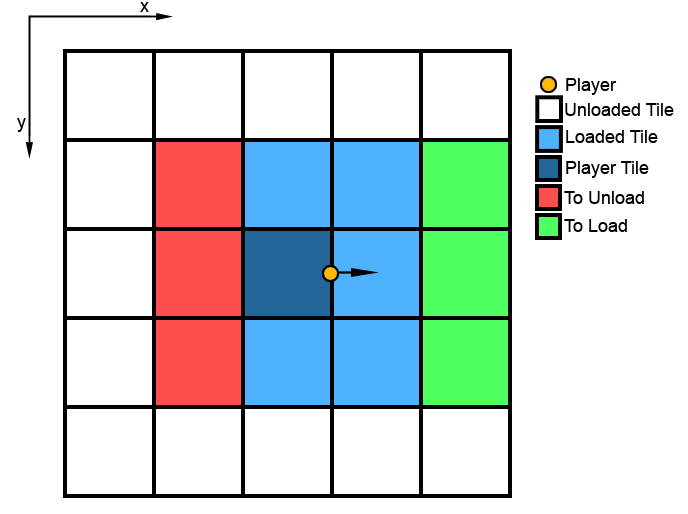 How do I design such a system?

There are a few problems to solve here. The first is how to load and unload tiles. The ContentManager by default will not let you unload specific pieces of content. A custom implementation of this, however, will:

The second issue is how to decide which tiles to load and unload. The following would solve this problem:

The final issue is how to decide when to load and unload. This is probably the easiest part. This could simply be done in the Update() method once the player's screen position was determined:

Of course you would also need to draw the tiles, but given tileWidth, tileHeight, and the Tiles[] array, this should be trivial.

What you want to do is pretty common. For a nice tutorial on this and other common techniques, check out this tile engine series.

If you haven't done anything like this before, I recommend watching the series. However, if you wanted you could get the last tutorials code. If you do the later, check out the draw method.

In a nutshell, you need to find your min and max X/Y points around the player. Once you have that you just loop through each one and draw that tile.

As you can see there is a lot going on. You need a camera that is going to create your matrix, you need to convert your current pixel location to a tile index, you find your min/max points ( I add a little to my MAX so it draws beyond the visible screen a little bit), and then you can draw it.

I really suggest watching the tutorial series. He covers your current problem, how to create a tile editor, keeping the player within bounds, sprite animation, AI interaction, etc...

On a side note TiledLib has this built in. You could study their code as well.

I've been working on something very similar for my current project. This is a quick run down of how I'm doing it, with some side notes on how to make things a bit easier on yourself.

For me, the first problem was breaking the world into smaller chunks that would be appropriate to load and unload on the fly. Since you're using a tile based map, that step becomes significantly easier. Rather than considering the positions of each 3D object in the level, you already have your level split nicely into tiles. This lets you simply break up the world into X by Y tile chunks, and load those.

You're going to want to do that automatically, rather than by hand. Since you're using XNA, you have an option of using the Content Pipeline with a custom exporter for your level content. Unless you know of some way to run the export process without recompiling, I'd honestly recommend against it. While C# isn't nearly as slow to compile as C++ tends to be, you still don't want to have to load Visual Studio and recompile your game every time you make a minor change to the map.

Another important thing here is to make sure you use a good naming convention for the files containing your level's chunks. You want to be able to know that you want to load or unload chunk C, and then generate the filename you need to load to do that at run time. Finally, think of any little things that might help you down the road. It's really nice to be able to change how large a chunk is, re-export, and then see the effects of that on performance immediately.

At run time, it's still pretty straightforward. You'll need some way to asynchronously load and unload chunks, but this is highly dependent on how your game or engine works. Your second image is exactly correct -- you need to determine what chunks should be loaded or unloaded, and make the appropriate requests to make that the case if it is not already. Depending on how many chunks you have loaded at one time, you could just do this whenever the player cross a boundary from one chunk to the next. After all, either way, you want to make sure that enough is loaded that even in the worst (reasonable) load time, the chunk is still loaded before the player can see it. You're probably going to want to play with this number a lot until you get a good balance between performance and memory consumption.

As far as actual architecture goes, you're going to want to abstract the process of actually loading and unloading the data from memory from the process of determining what should be loaded/unloaded. For your first iteration, I wouldn't even worry about performance of loading/unloading and just get the simplest thing that could possibly work, and ensure that you are generating the appropriate requests at the appropriate times. After that, you can look at optimizing how you load to minimize garbage.

I ran into a lot of additional complexity due to the engine I was using, but that's pretty implementation specific. If you've got any questions about what I did, please comment and I'll do what I can to help out.

Not the answer you're looking for? Browse other questions tagged xna tiles tilemap loading xbox360 or ask your own question.

2
XNA: Huge Tile Map, long load times
6
Correct way to handle path-finding collision matrix
3
How can I load a large tile map with cocos2d?
1
Dynamically load images inside jar
4
How to load multiple 3D models dynamically xna
0
Open world loading/unloading with asset bundle in unity
0
How would you go about placing objects between chunks in a 2D game?