How to prevent multiple playing sounds from destroying your hearing?

The problem is that when I play 100 sounds almost at same time, all I hear is noise. It's not very attractive to listen it for 30 minutes straight.

I tried to fix this by allowing only 1 sound of each sound type to be played at once. But it still sounds really ugly; eventually my brain keeps hearing only the very end of the shot sounds (or the start of it?), and that gets on my nerves really quickly. Eventually I would just decide to turn off the sounds completely. So is there any point of using sounds in a game like this at all?

How does our dear reality handle this problem? If there is a war out there, how does it sound when hundred of men shoot almost at the same times?

Edit: Here is how the game sounds currently; there isn't even 100 sounds playing at once, maybe 20? http://www.speedyshare.com/VTBDw/headache.mp3 At the beginning it sounds OK, but then it becomes unbearable! In that audio clip there is allowed only 1 sound to be played at once, so it will stop the previous playing sound when new sound is played.

Edit2: And here is same headache but 32 simultaneous sounds allowed to be played at same time: http://www.speedyshare.com/TuWAR/headache-worse.mp3 Quite a torture, eh?

But you could simulate it. When the game gets particularly noisy, reduce the overall volume down to a bearable level.

There is a name for such an audio filter: It's called dynamic range compression. An advanced audio API might even provide it out-of-the-box.

Also, when events technically happen at once, you should still try to offset their sound effects by some microseconds. When 10 enemies fire their guns in the same game-logic-frame, the 10 gunshot sounds should not play in perfect unison. This will sound like one very loud gunshots, not multiple which happen simultaneously. They will sound more realistic when they are slightly offset (chorus effect).

Your sound files are gone, but just attenuate the sounds that are further away, severely.

So use an INVERSE CURVE, or an EXPONENTIAL CURVE to attenuate the noise volume. 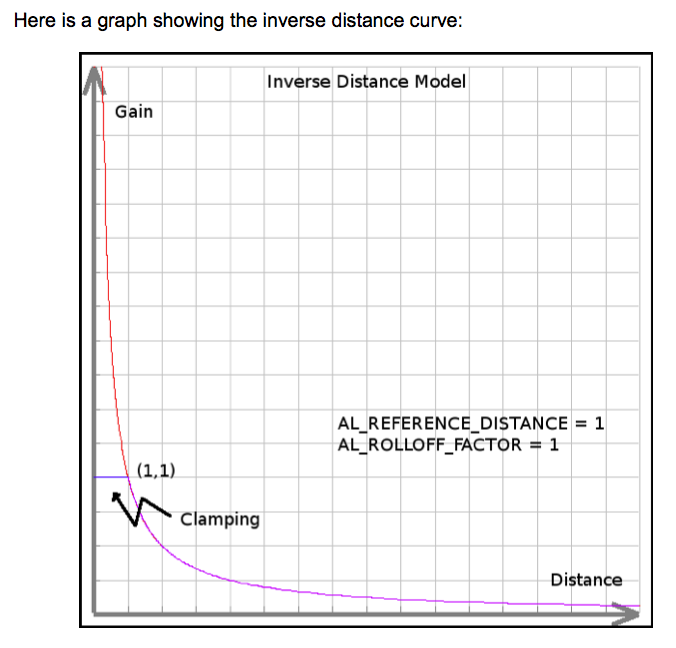 If that's not enough, you can even use an exponential curve: 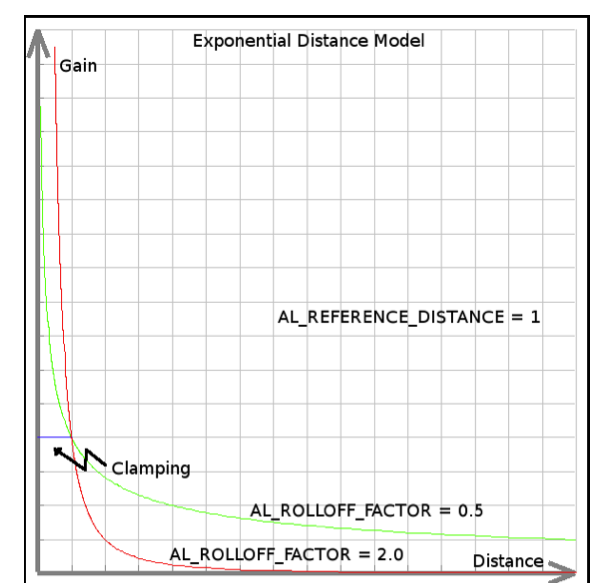 In OpenAL, use the function alDistanceModel with any of:

The default is AL_NONE, so that would be pretty noisy if you have many sounds playing at once.

Try limiting the total number of things that can play a sound at a given time. For example if numberOfSoundsPlayingRightNow > 5, then ignore the sound effect that just got triggered.

Also try bringing the volume down for sound effects that are less important.

Another thing to try is to limit how often a single game object can emit sound to prevent a single object form spamming the same SFX over and over. For example an object would check before playing: if lastTimePlayed < 1 second, then the sound trigger.

You can also look into an game audio tool like Wwise where you can easily tweak the audio from the game.

It is also a burden and waste of CPU to play sounds that you won't hear or associate with the source object. Use your resources wisely.

Not the answer you're looking for? Browse other questions tagged sound sound-effects openal or ask your own question.

6
Playing Sounds and removing instances once they have played — Android
5
How to play many sounds at once in OpenAL
2
Best practices for playing sounds in iPhone games
0
XNA - how to prevent a sound from looping
2
How to prevent overlapping of gunshot sounds when using fast-firing weapons
2
Looping OpenAL sounds with one buffer - or how to do it correctly?
2
Sounds overlapping when playing too many at the same time
3
How do you use SoundManager for multiple player games over the network?
1
How do I handle collision sounds with many objects?
0
Is there a word that describes when too much audio is being play simultaneously?