I'll keep it short. How does one achieve the effect depicted in the image below? Is it feasible to do in realtime? It looks deceptively simple, but it probably isn't. Are there any keywords I can search for to get more information about programming the shaders to achieve this look? Thanks. 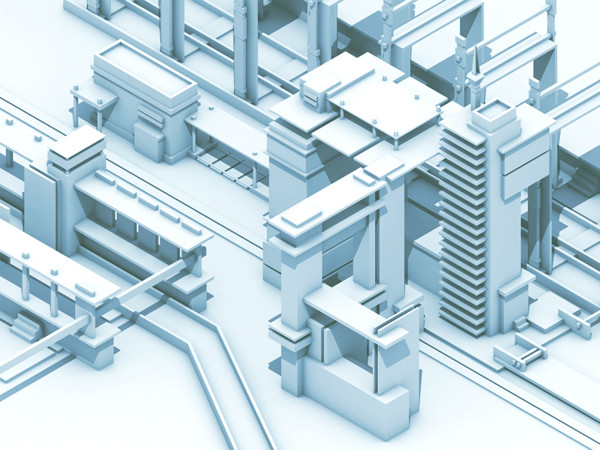 That does not appear to be using any kind of specific flat-shading approach, at all. The shading is smooth, though the projected shadows are hard-edged, and the objects are not rounded.

The specific lighting effect appears to be a combination of ambient occlusion (probably SSAO, "screen space ambient occlusion") which is what gives it that soft shadowing in crevices and regular ol' hard-edged shadow mapping and a plain lighting model (probably just Phong lighting).

An orthographic projection is being used. The only light appears to be a directional light which combined with all the objects being squared and flat is why each face has a mostly uniform shade (not any kind of special flat-shading technique).

Occlusion maps are usually made using ray-tracing techniques. They can not be generated in realtime with sufficient quality on current home computers.

Those maps are usually pre-rendered into texture. That texture can be later rendered using classic GPU rasterization techniques.

In short, one could probably come close to this level of image quality in real time, using for instance high-quality PCF shadow filtering, a high-end AO technique such as HBAO or Scalable AO, and a custom MSAA resolve. It would be a lot of work and you'd need a fairly powerful GPU.

Not the answer you're looking for? Browse other questions tagged shaders graphics graphics-programming or ask your own question.

1
What kind of shader is this?

1
How to achieve this particular screen filter with GLSL?
10
How to create a "retro" pixel shader for transformed 2D sprites that maintains pixel fidelity?
4
OpenGL ES 2 shaders for drawing buildings and roads like Google Maps does
8
How do I create a 2.5d parallax effect?
7
What Shading/Rendering techniques are being used in this image?
7
OpenGL 2.0 - Texture animation with 'pixelated' effect
1
Dissolve object starting from the bottom