Really simple video games, how to design games for the non-gamer market?

With the boom of mobile and social games reaching more and more people and new technologies like the wii, kinect and geolocation hardware and gadgets appealing to a bigger market than the hardcore gamer, the indie game development has a new challenge: create simple games.

This might seem easier, but I think its really way harder. Game developers are usually fans of RPGs, FPSs, massively complicated games with complicated goals, mechanics and stories. That is not what the usual casual player is looking for, and getting into the mind of a unknown market is really hard.

So, how to design games for the casual, non gamer market?

I know its a very broad question, but I would love to know how people design, playtest and deliver this sort of games.

A very big point for me is that somethings while trying this exercise of designing simple games I get a feeling that it is TOO simple or even non challenging when it might be complicated and challenging enough for that market.

I find that most non-gamers want a game that is simple to learn, and immediately rewarding.

For starters, that means that you should be able to explain you game in about 30 seconds, or 1-2 screenshots. If the player can't figure out the core mechanics on the first couple of attempts they'll probably think it's too complicated, even if it makes it more fun once they do figure it. They want to know how to play right away.

You mention that developers like RPGs, games that are often very complicated. Some RPGs have levelling systems that are games unto themselves! Just trying to figure out the best way to upgrade your characters is very involved(which can be fun), something casual players won't bother with. Make your game simple to figure out, show the player how fun it is before they ever play the game. It might be fun to develop your character in an RPG, but it's hard to show a player that with a handful of screenshots or in a game review. One the other hand, when you look at a Tetris or Pac-man screenshot, you can probably tell right away what is fun about the game.

The other thing is immediately rewarding. The game should reward for playing the game well both visually and gameplay-wise. If the player beats a level, they should get something like a powerup or a special bonus level. In addition, there should be cool sound effects and visuals that tell them they succeeded. A simple "High Score" page isn't good enough. In addition, the player should be able to get to the "fun part" very quickly. Again, take a modern RPG, you might have to spend a few minutes setting up your character, choosing a class and creating an avatar before ever getting to the "real" game.

One must not underestimate the importance of presentation. If the game looks fun, the player will have more fun. A nice graphical theme can go a long way.

A good example is the iphone game "Flight Control" 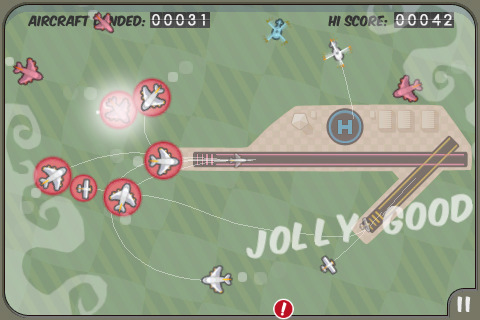 If you haven't played the game before, looking at that screenshot you can probably figure it out. Use your finger to draw a path for the planes to follow. Avoid plane crashes. Very simple, and the graphics clearly and pleasantly show what's going on. Red circles show imminent crashes, to avoid guesswork and make it even simpler to understand.

I'm going to concentrate on the 'casual vs hard-core' aspects of your question.

There are several schools of thought on how to design games in general. The 'compulsion-based' one models 'fun' around compulsions.

You can think about compulsions like 'mini-goals' that our brains have. When these goals are satisfied, the brain pleasure centers get activated.

They are not the same for every one, but they tend to be equal per demographic group.

The 'hard-core' games you mention tend to favor one 2 specific types of compulsion:

The empowering compulsion has a tendency to be stronger on males than females. The mastery compulsion usually appeals more to engineers (hence, also males in general).

The 'casual' games focus on a different set of compulsions. Pet society, for example, relies on the 'accumulation' compulsion. Although I get a certain degree of pleasure by accumulating stuff (achievements in games), my girlfriend gets hooked on that pulsion much more than me.

The Wii games tend to favor the social compulsion - relate with others while gaming.

You feel that these games are too simple because you are very used to getting your pleasure from the mastery or empowering compulsions, and these games provide very little on that front.

Another aspect is the 'cute' factor. I would not call it a compulsion, but a necessary design decision. The vast majority of people will like your game if it's 'cute', or will not mind. On the other hand, if you make a game 'serious looking' then a great percentage of people (nearly all casual gamers) will not feel appalled by it. And that's why nearly all casual games tend to play on the 'cute' card.

EDIT2: This article in Gamasutra explains compulsions much better than me.

"Easy to learn, hard to master"

I would play some of those games, and try to get addicted to them. I guess there's no shame to be addicted to Mafia War, Ravenwood Fair, Plants vs. Zombies and some of those Flash games for a while :P (even though I am too a hardcore gamer).

Like designing hardcore games, I believe that casual/'non-gamer' games revolve around presenting challenges. However, those games usually focus on one challenge and slowly scale it up, instead of pushing all of it to the gamer. Then you ask "What is the simplest form of this challenge?" and set it as the first level. After that, you think, "How complex can this challenge be?" and do additional levels.

Second, it is the theme. Most of the time hardcore games deal with themes not accessible by non-gamers, such as fantasy, science-fic, military (which is, however, very accessible to male) and etc. It is possible to take a game, give it another theme, and it appeals to the casual market. There's a game on the iPhone now where you collect candies (or something) and it looks a lot like Sonic. Just a change of theme, and it could be a casual game.

Not the answer you're looking for? Browse other questions tagged game-design casual-games .

5
For games that time stamp a saved game (think Half-Life), is the entire game state really being saved every time?
12
How to make a market test for the game?
0
Game design for lumosity type games
1
Math / game design for non-linear armor degradation?
2
Design constraints for games that the elderly (65+) get engaged with