I'm done implementing Moller's tri-tri intersection routine. It gives you the location of where each triangle edge intersects the line of intersection between the 2 triangle planes: 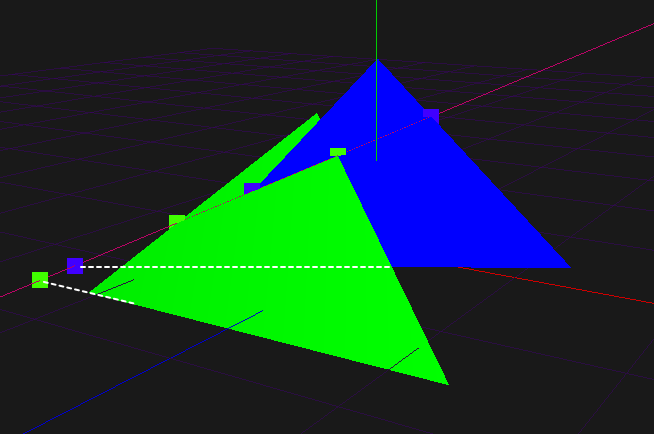 Really you get the point location in the form of t values along the (really big) purple ray shown above. So you can tell if the triangle intersects if the t values are overlapping..?

That's what the paper says. But I can show you scenarios where the t values are overlapping, but the triangles don't intersect: 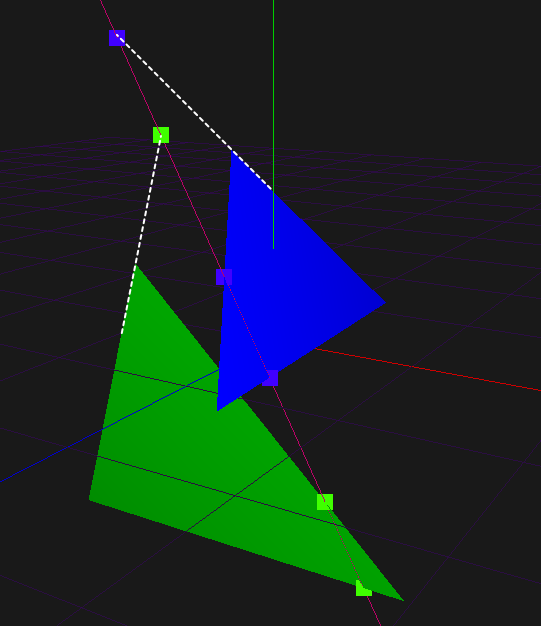 So I can't seem to figure out which edge value to discard.

The original paper is here: http://fileadmin.cs.lth.se/cs/Personal/Tomas_Akenine-Moller/pubs/tritri.pdf

It's not very clearly explained in the paper, but you can tell which two out of the three edges to look at by seeing which vertices are on which side of the other triangle's plane.

You should always get one vertex on one side of the other triangle's plane and two on the other side, since if all three were on the same side of the plane then the triangles don't intersect and this would have been detected earlier in the algorithm.

BTW, there's Moller's sample code for this algorithm on the web (the link in the original paper is dead, but I found this one by following a link from the Real-Time Rendering intersection test table). The relevant part looks like the NEWCOMPUTE_INTERVALS macro.

Not the answer you're looking for? Browse other questions tagged intersection or ask your own question.