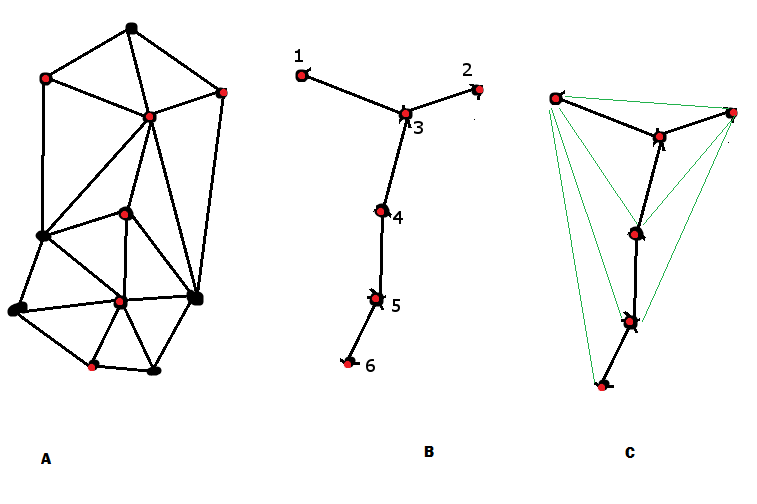 Referring to the above exhibits, this is the scenario I am working with:

Problem: I need to quickly build a triangulation around the subgraph (e.g. as shown in figure C), but under the constraint that I have to keep the already present edges in the final result.

Question: Is there a fast way of achieving this given a partially triangulated mesh? Ideally, the complexity should be in the O(n) class.

Nevertheless, disregarding the remarks, is there an already known scenario similar to this one where a triangulation is built upon a partially given set of triangles/edges?

The only algorithm I've found for solving this problem is the constrained Delaunay triangulation algorithm discovered by Paul Chew (http://www.cmlab.csie.ntu.edu.tw/~plokm/htdocs/cmlab/%B1M%C3D/triangulate/Constrained%20Delaunay%20Triangulations.pdf ).

As in the case of the classical Delaunay triangulation, the complexity is still O(n log n), which is probably reasonable.

I wonder if there is a faster way if one starts with a tree instead of a more general, arbitrary set of non-crossing edges.

Not the answer you're looking for? Browse other questions tagged algorithm graph triangulation or ask your own question.

17
Partially observable game map — is A* appropriate?
2
Triangulating a point mesh at runtime
7
How to find path in graph without crossing the walls?
0
Why the triangulated body in box@d as a sensor is not treated as one but separate triangle bodies?
6
Make a triangular mesh from of a map defined by points that follow the coast lines
2
HPA* Pathfinding, building the hierarchical graph is too slow
1
Voronoi graph - traversing from vertex to vertex
1
Mesh Triangulation that is inside<->outside aware