How can I find the largest sphere that fits inside a frustum?

How do you find the largest sphere that you can draw in perspective?

Viewed from the top, it'd be this: 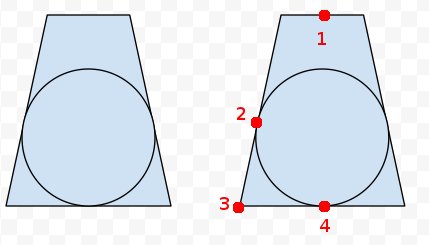 Added: on the frustum on the right, I've marked four points I think we know something about. We can unproject all eight corners of the frusum, and the centres of the near and far ends. So we know point 1, 3 and 4. We also know that point 2 is the same distance from 3 as 4 is from 3. So then we can compute the nearest point on the line 1 to 4 to point 2 in order to get the centre? But the actual math and code escapes me.

I want to draw models (which are approximately spherical and which I have a miniball bounding sphere for) as large as possible.

Update: I've tried to implement the incircle-on-two-planes approach as suggested by bobobobo and Nathan Reed :

I admit I'm winging it; I'm trying to adapt 2D code by extending it into 3 dimensions. It doesn't compute the insphere correctly; the centre-point of the sphere seems to be on the line between the camera and the top-left each time, and its too big (or too close). Is there any obvious mistakes in my code? Does the approach, if fixed, work?

A. the sphere cannot be larger than the distance between the near and far planes

If D is the near-far distance, the first constraint is simply:

B. the sphere cannot grow wider than the side planes

Now for the other constraint, let’s say α is the half-angle of the frustum and L is the half-width of the far plane, as shown in this drawing: 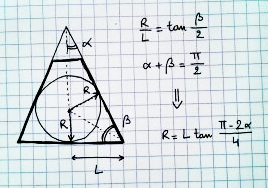 The first formula is given by trigonometry in the triangle. The second comes from the sum of a triangle’s angles. Which gives us the second constraint:

If your frustum is 3D, you'll have a third constraint with new L and α values.

The R value you are looking for is the min of the three bounds.

How to get the parameters 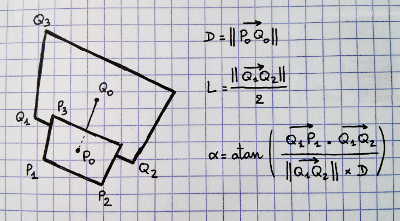 Arrows mean vectors, “.” is the dot product, and || indicates the length of a vector. Replace Q2 with Q3 and P2 with P3 to get L and α in the vertical dimension.

In 2D: consider the frustum as a triangle (2D) 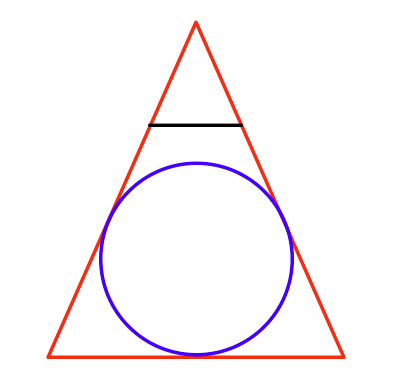 You then want to find the incircle of the triangle.

As a 3D problem, you need to find the insphere of a square based pyramid.

If I had the formula I would print it here, but alas, I do not know the formula.

The Biggest Sphere possible should touch the far-plane (using the terms for view-frustrums here) right in the center. It would also touch the top/bottom or the left/right planes, depending on which FoV-angle is smaller. I have to say that i don´t have an actual mathematical proof for those assumptions, but they should be right. Maybe someone has an idea on how to proof this.

A Sphere can be defined by it´s center point and a radius. Cx and Cy is the same as the center of the farplane.

Cz and the radius can be obtained by solving an equation system based on the assumptions listed above.

T is one of the either bottom/top plane or left/right plane (see above) with t1,t2 and t3 as normalized normal vector and t4 as distance from origin. f is the center of the farplane.

r is then calculated by inserting cz into this: -fz + cz = r

You can obtain all planes from the Projection Matrix youre using. (Not ViewProjection in this case)

afterwards you have to move the sphere to the right space: C' = inverse(View) * C

I'm attempting to do something similar, and in my case, speed is more crucial than accuracy as long as the sphere does not exist outside any of the frustum's bounds.

The only drawback is that the circle or sphere won't necessarily be the largest incircle or insphere possible. For a frustum with a lot of volume and one very short edge, the circle/sphere would share much less of the frustums space than possible.

Not the answer you're looking for? Browse other questions tagged geometry or ask your own question.

18
How can I convert a mouse click to a ray?
0
Minimap Around Perimeter of Screen, Code Provided
1
Geometry problem for area of sight
0
"Walking" along a rotating surface in LimeJS
1
Calculate diameter of sphere large enough to encompasss a frustum
9
Dual Contouring - Finding the feature point, normals off
2
Point plotting with a line graph
0
Contact friction for overlapping rectangles