How to position two objects relative to each other

The spawning of the parts I have no problem with.

For moving the parts in the environment I have an invisible plane that is parallel to the camera and rotates to always face the camera. I then draw a ray from the mouse to the plane and update the parts position to the location where the ray hits the plane.

When the new part is in the correct position I will add I make it the child object of the part I want to connect it to. 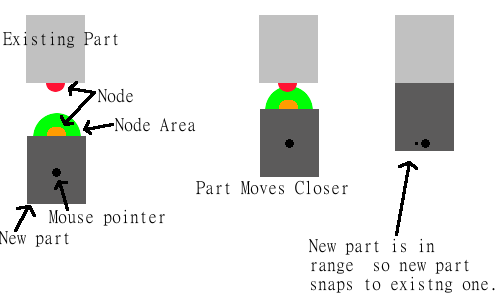 If your nodes are placed on the edges of your objects, that makes this a little easier. It's simple vector math for aligning the two objects.

You have two points, A and B. These points are the positions of your nodes, or points on the edges you want to snap together.

Simply calculate the difference in them. This difference is the amount you want to move your part so that A and B are the same point.

As you can see in the image above, the yellow line is the distance between the points and the red line is the amount you need to move the dark grey part to align them. These are the same lines.

2
How to stop objects pushing each other away on collision?
0
Instantiating on a random node, provided the node is walkable, but what if it isn't walkable?
9
Building an Octree for terrain generation
1
Replicating a worldspace sphere on screen space
1
Consistent normals at any angle in bezier curve
0
How do I move many “static relative to each other” objects around?