This is a general question, but as a specific example, I'll use the XNA Particles3D sample (http://xbox.create.msdn.com/en-US/education/catalog/sample/particle_3d).

Since each particle is a quad of 2 triangles, there are 2 vertices per particle that are shared. That's enough to consider it a savings to index them. It reduces the vertex buffer size from MaxNumParticles * 6 (if you didn't use indices) to MaxNumParticles * 4 (when using indices, like the sample does). If you set it to 1000 max particles per particle system and have a half dozen systems loaded up, it's worth saving that GPU memory. All for the expense of a relatively small amount of space that the index buffer uses.

Take these two strips for example: 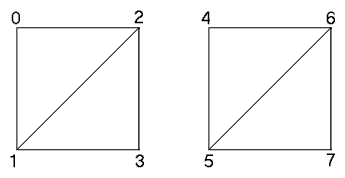 They don't share vertices, and without indexing you would need to make a separate draw call per strip. Now multiply that by hundreds or thousands, and you'll get so much draw call overhead that your performance will really suffer.

However, if you add an index buffer you just need a single draw call to draw both of them. Hundreds of particles? Single draw call. Thousands? Likewise. So you get to avoid the draw call overhead of an unindexed particle system.

Another reason is that instancing is sometimes used as an efficient way of pushing vertex data to the GPU for particles. Using instancing it's possible to draw billboarded particles using only one vertex per particle, rather than the usual four, so this quarters the memory overhead.

Now, and again with D3D9 class APIs, instancing is only supported for indexed drawing. So if you want to use instancing you have no choice - you must index.

(Of course other solutions - such as point sprites and geometry shaders - are also possible for particles, but since the question was about indexing I'm focussed on answers that provide the rationale for that.)

I've never measured, but there may be use for index buffers in mesh particles. Though the particles don't share vertex, the meshes making up a particle might, and reducing the vertex processing of those is just as helpful (if not more so, with a large enough number of particles) than doing it for many "regular" models.

Not the answer you're looking for? Browse other questions tagged 3d particles index-buffer or ask your own question.

7
Using 16 bit index buffers - USHORT vs UINT
2
How can I actually understand Instanced Geometry Rendering - so that I can implement it the way I need it
0
Using a Vertex Buffer and DrawUserIndexedPrimitives?
3
How are done "snake" particles?
0
Blood particles system,join particles
3
OpenGL vertex data per index
1
Direct3D11 Reading from (Static) Index Buffer
0
Implement Hearthstone disenchant extra cards particles