Is OpenGL appropriate for 2D games?

I have been teaching myself the OpenGL library for a while now, and want to start making a game. However, for an easier introduction, I want to start with something 2D, such as a top down Pokemon-style game.

Is this a good plan, or is OpenGL made specifically for 3D?

OpenGL is quite appropriate for 2D games. Although it is generally used for 3D, the same functionality can be used for 2D games. That is to say, anything you can do with 3D OpenGL will be applicable with "2D" OpenGL.

Some further information can be found at this location.

2D OpenGL is achieved in the same manner that 3D OpenGL is. 2D OpenGL is only the application of a technique, that is, rendering the scene on a flat plane, then using and orthographic projection instead of a perspective projection, which, depending on your setup, could distort the scene. 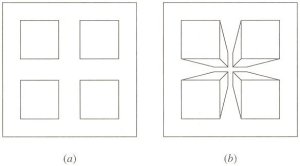 In addition, OpenGL carries many, many, many benefits with it. Primarily, hardware acceleration is a huge plus. There's also a much finer degree of control over what the graphics card does and how it goes about it, allowing for case-specific optimizations

OpenGL as the name states is a graphics library. Although it is developed with 3d in mind, there are no hardcoded assumptions in the library that you'll be using 3d. Moreover, thanks to it's 3d capabilities, several things that would be hard to do in a strictly 2d approach are trivial. Examples:

This is only a few advantages that come from the top of my head, I guess there are several others.

While OpenGL is a 3D API, you can still use it to make 2D games. You can fake a 2D environment in 3D through various techniques, such as contraining data to a plane.

However, there is limited support in the actual API for doing this in an obvious fashion (there's no "turn on 2D mode" function, for example). The ways in which you'd simulate it (which you can find in many tutorials online) may be difficult to fully understand without some understanding of the 3D pipeline that is actually being used under the hood.

It sounds like you have been looking at OpenGL for a while and so probably have a decent grasp of those fundamentals. However, if you feel shaky on them you may want to start with your game by using a 2D library that is built on top of OpenGL, such as cocos2d. It will give you some experience with what 2D APIs generally should look like and still gets you the benefits of a hardware-accelerated 3D back-end, if you feel like you aren't quite ready to tackle the whole thing on your own.

Many 2d graphic libraries like SDL or SFML make use of OpenGL hardware acceleration. This gives you the performance benefit of OpenGL, but abstracts the nasty low-level details behind a much simpler API.

I now have a lot of experience in OpenGl programming, and I can tell you it is a pain. In the past when I started programming I was very productive in simple environments like BlitzBasic. Then I started to go into the next step with learning C++ and OpenGl. And when you do not have a good teacher or people to ask, you will permanently run into the black screen. The biggest problem is the state hell of OpenGl. There are tons of switches that you can swap to change the state of opengl. And some switches depend on other switches. for example glGet(GL_TEXTURE_BINDING_2D) depends on glGet(GL_ACTIVE_TEXTURE). And the documentation which state depends on which other state is not the best. Many operations like texture loading requires you to change this state which very often leads to the breakage of other code that requires the old state. And then there is this problem that OpenGl as implementation dependant behavior, so that your program runs on your machine but on the other machine all you see is black. All you can do here is guessing what is wrong in your 10000 lines of code. So if you like frustration then yes use OpenGl for 2D things. To all other people, don't do it if you don't need it. You can get productive in OpenGl, but it will cost you a lot of your time and nerves. Propably more than you want to spend.

20
For 2D games, is there any reason NOT to use a 3D API like Direct3D or OpenGL?
7
OpenGL 2 and back vs 3 and forward: What are the key differences for 2D graphics?

20
For 2D games, is there any reason NOT to use a 3D API like Direct3D or OpenGL?
4
Restricting Camera Movements with OpenGL
2
Is this process for generating an OpenGL perspective projection correct?
0
Perspective View using Spritesheets