Grouping entities of the same component set into linear memory

We start from the basic systems-components-entities approach.

Let's create assemblages (term derived from this article) merely out of information about types of components. It is done dynamically at runtime, just like we would add/remove components to an entity one by one, but let's just name it more precisely since it is only about type information.

Then we construct entities specifying assemblage for every of them. Once we create the entity, its assemblage is immutable which means we cannot directly modify it in place, but still we can obtain existing entity's signature to a local copy (along with contents), make proper changes to it, and create a new entity out of it.

Now for the key concept: whenever an entity is created, it is assigned to an object called assemblage bucket, which means that all entities of the same signature will be in the same container (e.g. in std::vector).

Now the systems just iterate through every bucket of their interest and do their job.

This approach has some advantages: 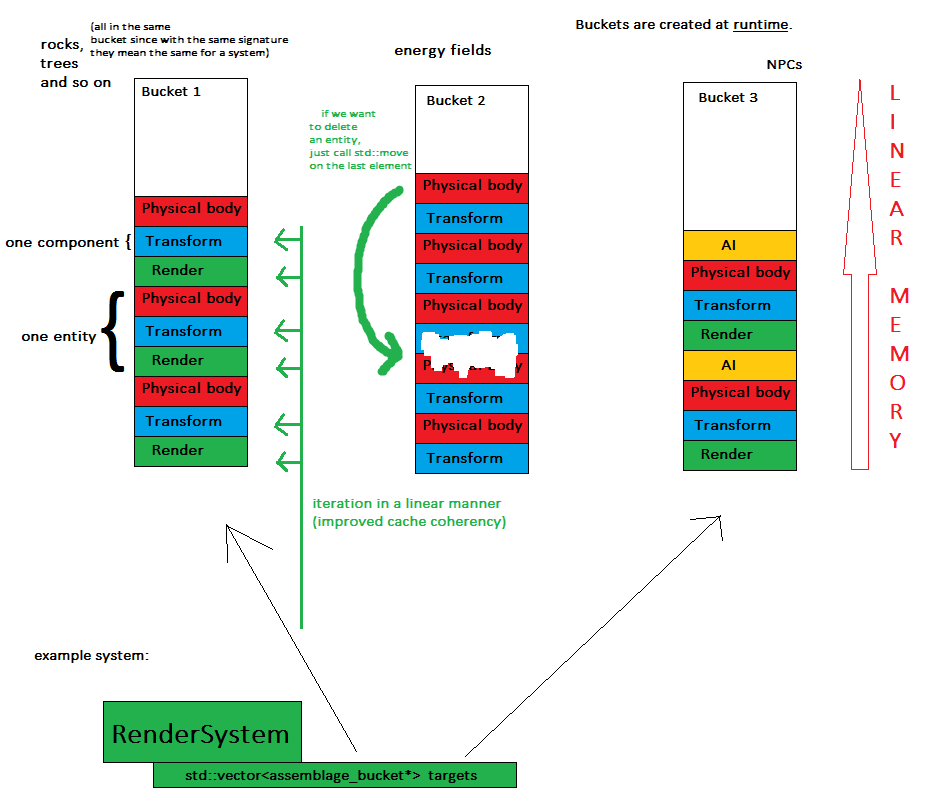 If we have a lot of entities with completely different signatures, benefits of cache coherency kind of diminish, but I don't think it would happen in most applications.

There is also a problem with pointer invalidation once vectors are reallocated - this could be solved by introducing a structure like:

So whenever for some reason in our game logic we want to keep track of a newly created entity, inside the bucket we register an entity_watcher, and once the entity has to be std::move'd during removal, we lookup its watchers and update their real_index_in_vector to new values. Most of the time this imposes just a single dictionary lookup for every entity deletion.

Are there any more disadvantages to this approach?

Why is the solution nowhere mentioned, despite being pretty obvious?

EDIT: I'm editing the question to "answer the answers", since comments are insufficient.

you lose the dynamic nature of pluggable components, which was created specifically to get away from static class construction.

I don't. Maybe I did not explain it clearly enough:

It's as simple as just taking existing entity's signature, modifying it and uploading again as a new entity. Pluggable, dynamic nature? Of course. Here I'd like to emphasize that there is only one "assemblage" and one "bucket" class. Buckets are data-driven and created at runtime in an optimal quantity.

you'd need to go through all buckets that might contain a valid target. Without an external data structure, collision detection could be equally as difficult.

Well, this is why we have the aforementioned external data structures. The workaround is as simple as introducing an iterator in System class that detects when to jump to next bucket. The jumping would be purely transparent to the logic.

You have essentially designed a static object system with a pool allocator and with dynamic classes.

I wrote an object system that works almost identically to your "assemblages" system back in my school days, though I always tend to call "assemblages" either "blueprints" or "archetypes" in my own designs. The architecture was more of a pain in the butt than naive object systems and had no measurable performance advantages over some of the more flexible designs I compared it to. The ability to dynamically modify an object without needing to reify it or reallocate it is hugely important when you are working on a game editor. Designers will want to drag-n-drop components onto your object definitions. Runtime code might even have need to modify components efficiently in some designs, though I personally dislike that. Depending on how you link up object references in your editor, simply being able to add and remove components to existing objects with zero extra shenanigans will come in handy.

You're going to get worse cache coherency than you think in most non-trivial cases. Your AI system for instance doesn't care about Render components but ends up being stuck iterating over them as part of each entity. The objects being iterated over are larger, and cacheline requests end up pulling in unnecessary data, and fewer whole objects are returned with each request). It'll still be better than the naive method, and the naive method object composition is used even in big AAA engines, so you probably don't need better, but at least don't go thinking you can't improve it further.

Your approach does make most sense for some components, but not all. I dislike ECS strongly because it advocates always putting each component in a separate container, which makes sense for physics or graphics or whatnot but no sense at all if you allow multiple script components or composable AI. If you let the component system be used for more than just built-in objects but also as a way for designers and gameplay programmers to compose object behavior then it can make sense to group together all AI components (which will often interact) or all script components (since you want to update them all in one batch). If you want the most performant system then you're going to need a mix of component allocation and storage schemes and put in the time to figure out conclusively which is best for each particular type of component.

What you've done is re-engineered C++ objects. The reason why this feels obvious is that if you replace the word "entity" with "class" and "component" with "member" this is a standard OOP design using mixins.

1) you lose the dynamic nature of pluggable components, which was created specifically to get away from static class construction.

2) memory coherence is most important within a data type, not within an object unifying multiple data types in one place. This is one of the reasons that component+systems were created, to get away from the class+object memory fragmenting.

3) this design also reverts to C++ class style because you are thinking of the entity as a coherent object when, in a component+system design, the entity is merely a tag/ID to make the inner workings understandable to humans.

4) it is just as easy for a component to serialize itself than a complex object to serialize multiple components within itself, if not actually easier to keep track of as a programmer.

5) the next logical step down this path is to remove Systems and put that code directly into the entity, where it has all the data it needs to work. We can all see what that implies =)

Keeping like entities together isn't as important as you might think, which is why it's hard to think of a valid reason other than "because it's a unit". But since you are really doing this for cache coherency as opposed to logical coherency, it might make sense.

One difficulty you could have is interactions between components in different buckets. It's not terribly straight forward to find something your AI can shoot at for example, you'd need to go through all buckets that might contain a valid target. Without an external data structure, collision detection could be equally as difficult.

To continue about organizing entities together for logical coherency, the only reason that I could have to keep entities together is for identification purposes in my missions. I need to know if you have just created entity type A or type B, and I get around this by... you guessed it: adding a new component that identifies the assemblage that put this entity together. Even then, I'm not gathering all the components together for a grand task, I just need to know what it is. So I don't think this part is terribly useful.

Not the answer you're looking for? Browse other questions tagged architecture performance entity-system entity-component .

184
What is the role of "systems" in a component-based entity architecture?
10
Advices on Linking Between Entity Component System in C++

184
What is the role of "systems" in a component-based entity architecture?
18
How can I properly access the components in my C++ Entity-Component-Systems?
10
Advices on Linking Between Entity Component System in C++
6
Why are entities in a component system composed at run time?
6
How do you filter entities in an Entitiy Component System?
6
Entity-Component-System data storage design
1
Should entities auto-register to systems based on their component signature?
0
How to efficiently filter by a component with a specific value in an entity component system (all entities in grid position [x,y,z], for example)?