How do I target a tank turret with an offset barrel?

I was wondering, given a target in 3d space and the position of the tank, how to calculate the correct rotations to give to the parts in order for the barrel to align itself to fire at the target.

The position of the tank cannot change, only the rotations given to the turret and the barrel. I would know how to solve this if the barrel is aligned with the z axis of the turret but I am having difficulty solving this problem if parts are offset from each other. Eventually I want to expand this so that multiple joined parts can get the end part (firing point) facing a target. I am using XNA C#. 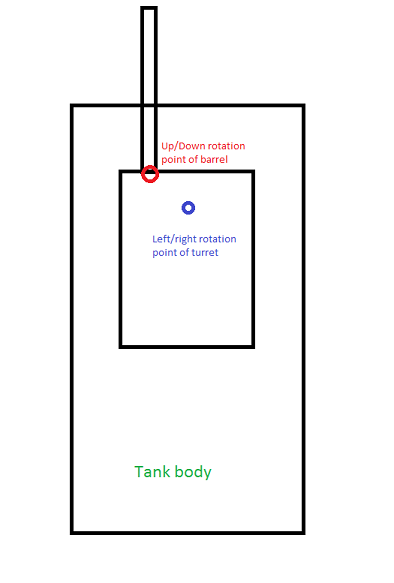 Calculate with Forward kinematic (transformations leading to (previously unknown) orientation/position) the Position and Upvector and Forwardvector (this vector points from the horizontal joint forward).

Inverse Part After that use the Position and the Upvector and the Forwardvector to calculate the vertical and horizontal target rotations.

The math and code and the description for the case if the horizontal joint is not on the vertical joint (the more general case) follows here.

If you look at the 2d case from above (so to say on the plane of the horizontal joint in the 3d world) you notice that when you rotate your horizontal joint the vertical joint spins on a circle.

So now we search the rotation offset, because you need to add the rotation to the HorizontalRotationRawRad variable to get the real rotation.

I call this point you get as the result of the intersection PlaneTarget.

Now you can calculate the distance from FKPosition to PlaneTarget and i call it c.

For the following calculation you need to calculate only once on gameloading or on the construction time of the tank or whenever only the distance from the horizontal joint to the vertical joint and the angle of the two (from 90 to 180 degrees) and the side of the vertical joint.

To calculate the offset angle we use the law of cosines: 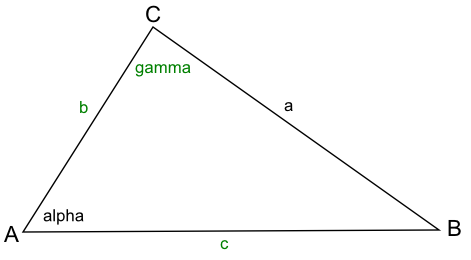 We know c and b and gamma and we search alpha.

we know a, notice to catch the cases if the target is inside the circle (c < b) because it wouldn't make much sense.

now we need to calculate the angle alpha with some more math...

now we can add/subtract alpha from/to VerticalRotationRawRad to get the correct angle for the horizontal joint.

Then just do a dot product between the normalized direction of the barrel and the difference to the target position (of course the result doesn't have a sign, if it should have one just use the horizontal plane and look if the target position is above or below it).

Now you just clear the turret and barrel rotations and apply these new. Not sure if it will work, but it's worth a try!

The up/down rotation of the barrel works like this: 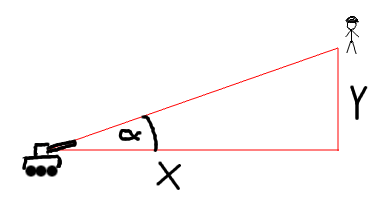 You need to rotate the gun up by alpha, which is atan2(y, x)

This is in side view. In your 3D-world where z is pointing up, x would be sqrt(xx + yy) and y would be z.

If you don't know what atan2 is, google it. It's the most helpful thing ever and C# has it too.

The left/right rotation of the turret works like this: 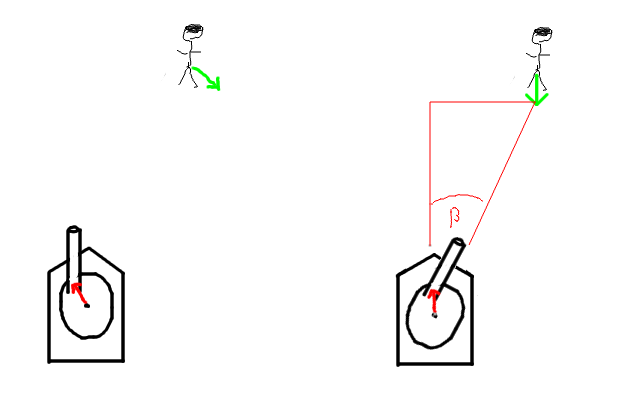 Your tank's gun is offset from the turret's origin by a vector v (red arrow).

So to hit your target, you need to rotate your turret by beta so that it (the turret, not the gun!) points at a spot that is offset from the target by minus v (green arrow). Makes sense? The rest is just basic trigonometry again (which I suck at, so use with caution).

Here's some pseudo-code that assumes that all the tank's component's positions are relative to their parents' (tank->turret->gun):

Not the answer you're looking for? Browse other questions tagged 3d xna-4.0 geometry or ask your own question.