How can I make an enemy to step around solid objects and follow the player at a given distance?

With this code, the enemy ships are chasing the player, but are still colliding with each other, they also rather fly around the player than following his trail.

This did not lead to the desired effect either.

How can I make an enemy to step around all solid objects in my level and follow the player at the given distance?

More context: The whole game plays in space and at the moment there are not many objects, but each type of object has it's own parent ( objPlayerParent, objEnemyParent, objPowerUpParent etc) and they are supposed to avoid all objects marked as solid. I also apologize for the quite noobish question but I am really new to advanced AI programming.

There are two popular solutions to your current problems. 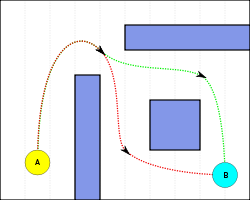 They can be implemented independently or in conjunction. Likely the easiest of the two to implement is steering. Steering also has the benefit of providing additional behaviors that can handle groups more easily, to avoid enemies colliding with each other when they're moving towards the player. The behaviors combined are called flocking.

There are lots of questions on this site that relate to implementing both pathfinding and steering. Additionally, the article linked above for steering has some excellent resources for implementing these behaviors.

4
In Game Maker, how do I make invisible platforms the player can walk on, and reveal with an item?
1
How can I make relative movement in GameMaker studio?
1
Why is the code in this if statement being run when the condition for it is not met?
0
How can I use collision lines to implement line-of-sight in GameMaker?
1
How to get the Javascript equivalent of GameMaker's `hspeed` and `vspeed` given only `direction` and `speed`?
1
How to make a vision cone for the enemy in game maker?
0
How do I get my team NPC to follow the player? | Game Maker Studio