Shear transformation in the projection matrix? 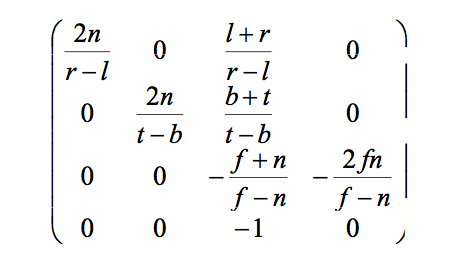 I am trying to understand what the shear transformation (l+r/r-l & b+t/t-b) is actually doing in the projection matrix? The only thing I got till now is headache :) Can you please help?

Those components come into play when making an "off-center" projection. They are normally zero, since people usually set the left and right edges to be equal and opposite - for instance, L = -1 and R = +1, which makes (L + R)/(R - L) = 0/2 = 0. Similarly for the top and bottom edges. This makes a projection whose center (the point where all the rays converge) is behind the center of the screen, which is normally what's desired.

However, by setting the left/right/top/bottom edges to values that aren't equal and opposite, you can put the center of projection anywhere on screen, or even off the screen entirely. One use case for this is in stereo 3D projection, where the two eyes look at the same screen, but each sees a different vanishing point. There's a paper about this here: Generalized Perspective Projection.

Not the answer you're looking for? Browse other questions tagged matrix projection view transformation .