I'm trying to do a simple ray picking implementation to allow a user to select a cell in a grid rendered in 3D. I'm almost there, but I've ran into an issue which I can't seem to solve. 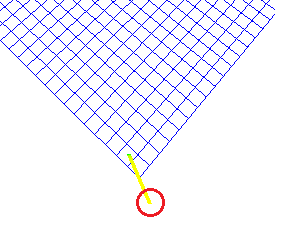 The line represents the ray. The circled part is where the mouse is, and the line's green tip is where it intersects with the grid (XZ plane). When I move the mouse around, the green tip moves almost opposite of the mouse.

What is causing this?

And yet, as the image shows, its not. Is there something wrong with my reasoning, or something I've overlooked?

A couple possible sources of error:

1) Is the double-negative on the Y-axis intentional?

Not the answer you're looking for? Browse other questions tagged opengl 3d grid raycasting .

3
How do you triangulate a 3D point from a pair of stereo images?
2
Raycasting mouse coordinates to rotated object?
0
Getting the Ray position from View and Projection Matrix
0
Ray casting problem using JOGL
1
Cursor position to a 3D ray using angles
0
Getting ray using gluUnProject or inverted MVP matrix
6
List cells in a 2D grid that belong in a sector / portion of a circle
2
C++ Mouse picking for ray to plane intersection