AI for a mixed Turn Based + Real Time battle system - Something “Gambit like” the right approach?

This is maybe a question that's been asked 100 times 1,000 different ways. I apologize for that :)

I'm in the process of building the AI for a game I'm working on. The game is a turn based one, in the vein of Final Fantasy but also has a set of things that happen in real time (reactions). I've experimented with FSM, HFSMs, and Behavior Trees. None of them felt "right" to me and all felt either too limiting or too generic / big.

The idea I'm toying with now is something like a "Rules engine" that could be likened to the Gambit system from Final Fantasy 12. I would have a set of predefined personalities. Each of these personalities would have a set of conditions it would check on each event (Turn start, time to react, etc). These conditions would be priority ordered, and the first one that returns true would be the action I take. These conditions can also point to a "choice" action, which is just an action that will make a choice based on some Utility function. Sort of a mix of FSM/HFSM and a Utility Function approach.

So, a "gambit" with the personality of "Healer" may look something like this:

Likewise, a "gambit" with the personality of "Agressor" may look like this:

What I like about this approach is it makes sense in my head. It also would be extremely easy to build an "AI Editor" with an approach like this. What I'm worried about is.. would it be too limiting? Would it maybe get too complicated?

Does anyone have any experience with AIs in Turn Based games that could maybe provide me some insight into this approach.. or suggest a different approach?

Many thanks in advance!!!

For a game like you described you might consider going for a full Planner based solution. This allows you to describe simple transformations of the world state the AI can perform. Essentially the AI plans a number of moves ahead of time to reach its desired goal. This approach is computationally expensive but for a turn based game it's a great fit over classical min/max and alpha/beta pruning techniques.

The issue you run into with the Rule Based System you described is having to constantly tweak conditionals and re-prioritize the list. When the list of rules grow larger they become nontrivial to fix small issues without affecting everything else. Utility systems have similar issues when a large number of utility functions constantly struggle between themselves.

STRIPS is a well known planner algorithm that was used very effectively in F.E.A.R http://en.wikipedia.org/wiki/STRIPS

Jeff Orkin's paper on his STRIPS implementation for F.E.A.R is a great starting place. A SDK to F.E.A.R is also available to take a look at some of the AI implementation details. http://web.media.mit.edu/~jorkin/gdc2006_orkin_jeff_fear.pdf

I decided that I would build a system that is a mix of the various different AI systems out there. I just felt that was the best approach for my game. It is heavily influenced by Rule Based systems, but also has some features from STRIPs, Behavior Trees, and Finite State Machines.

Each "node" in my AI has a method I call depending on the type (Decision, Condition, or Action). They all also have a Precondition and Postcondition step, which let me evaluate if I should even run that action or if that action was successful. If all 3 methods return true, I can continue onto the next node (or, if the last node, I'm done).

Each method also takes in the current BattleState and the current AIState. The AIState is modified by each behavior, as needed. The BattleState is NOT changed by the AI, but instead by the battle system as a result of the AI.

I really hope that makes sense. If not, here's a screen shot of my AI Editor. It shows a "stupid" personality tree that I can evaluate from left to right when needed. I can also pre-evaluate a node based on where the entity will be in X seconds. 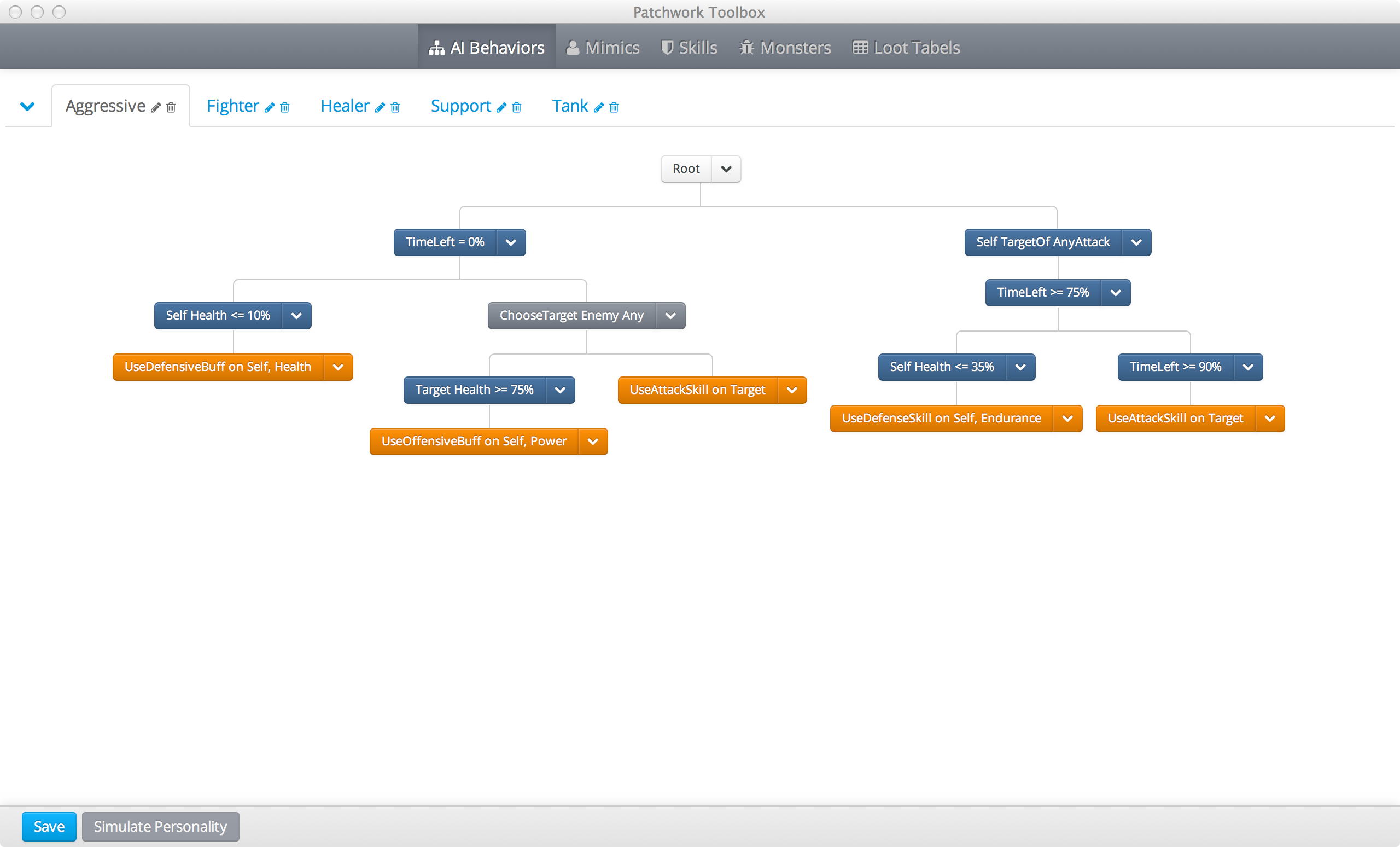 Each node has a bit of smarts in it that are not represented in the editor. For instance, the "ChooseTarget" action has a bunch of smarts about which target should be chosen: Who has the highest threat, who has the lowest health, etc. I could represent all these decisions in the tree but I didn't see the need for that... yet.

Each one of these nodes are also executable independently (mostly). Only certain nodes depend on the nodes before them. And, more accurately, only a few nodes have the POSSIBILITY of depending on the node before them. For example, "UseAttackSkill on Target" depends on the node before it because it needs a target set in the AIState. If that was, say, "UseAttackSkill on Enemy Any", I could execute that node without regard for it's current location in the behavior tree.

Not the answer you're looking for? Browse other questions tagged ai rpg turn-based or ask your own question.

8
Help with Strategy-game AI
7
Turn-Based RPG Battle Instance Layout For Larger Groups
5
Strategies for monster targeting AI in a turn-based combat system
6
techniques for an AI for a highly cramped turn-based tactics game
3
How can I imbue an ability system with information about how abilities interact and can be targetted?
0
Networking Board Game Design Pattern
1
Turn-based combat AI with multi turn planning
0
How do I make my turn based battle system scalable?
1
Component-based ability system for turn-based rpg