I am looking for 4-6 color schemes for three factions, good, evil and neutral (in a space strategy if that matters). I'd like the player to choose which side they want to play and each side will have an optional ally. Each team can have one or two colors (major/minor), if that makes the problem easier.

EDIT: I know that color perception can be subjective, context sensitive and influenced by culture. I am looking for a scheme that majority of players would see as a traditional fight between Good and Evil (Blue and Red comes to mind when having only two colours, two factions).

Based on this article about movie faction colour I'd pick:

But something doesn't feel right about the scheme. Maybe it's the absence of color and using three shades of gray. Also it will be impossible to create gray and black "lights", "aura" and similar effects.

You can do just like the Firefly Studios have done in their Stronghold series. In the bottom right corner of the picture you can see six colors, that can be easily distinquished. As a player, I do not mind remembering who is my enemy and you can always give the player(s) a chance to assign colors to the teams.

One thing I have to note, is that in the first edition of the Stronghold, The player would always play using the blue colors this his enemies were brown, yellow, red and black. The sequel to the game, Stronghold Crusader had the colors flipped, the player would always use the red color for his/hers units which felt awkward having to switch from one color to other. It took me a few hours to get used to the changes...

You could create trimms for the other players that are allied to the player. Like, if the player is blue his allies will be blue with a gold trimm around his armor/whatever.

You can add a skull next to the evil players, shield next to allies or anything else you might feel that would correspond to the game. 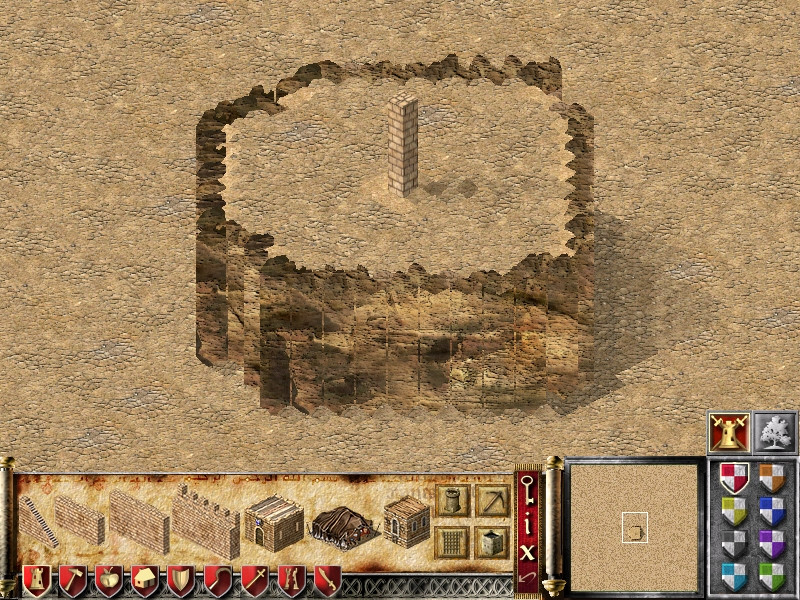 After a lot of thought and inspired by the other answers, I came up with a schema of 6 two color combinations. I realized that using just one color won't be enough, because I will have to repeat at least one of them, making either good a shade of evil or vice versa (which sounds pretty zen). I've also asked a web designer to help me pick and name the colors. I searched for these color among video games or movie heroes and villains. I've also went through comic book superhereos, anime characters and AD&D famous characters.

The six combinations are from top left:

I've added the aura effect. Also the image has transparent background, if you are interested to see it on different color backgrounds. 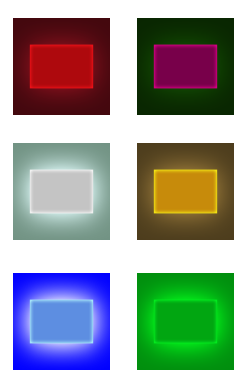 Also @Sean Middleditch has a good point with shapes.

Just FYI, the colors were simulated for people with deuteranopia, protanopia and tritanopia (three color blidness variants) and they still look recognizable from each other, thanks to the color combinations. But I'd be very much interested how colorblind people classify those colors.

Shades of grey are generally not a good idea to tell players apart, because due to shading, white, grey and black can easily blend into each other.

When two factions form a team, it would be a good idea to give them colors which are close to each other in color spectrum but still distinct colors. I would do it like this:

But note that the distinction of "good" colors and "evil" colors is not a very strong concept. Color psychology in general is heavily dependent on context and doesn't span cultural borders very well. To give an example: White in western culture stands for purity and cleanness. White in eastern cultures is the color of death and mourning.

I was originally passing on this question, as I feel there are far more important qualities to color choice beyond traditional moral delineations in mainstream American media, such as cultural meanings, historical meanings, theme and "look and feel" of the fiction, color blindness, usability, and more. However, if what is truly desired is a "common" perception of good, evil, and neutrality, then:

Every hue has positive associations, but blue and green are almost universally positive, being the colors of a clear sky and plant life. Any habitable land on a temperate day will flourish with blues and greens.

Red has significant negative correlations that transcend culture, largely due to the color of human blood. While doctors and healthcare are often associated with red, so are wounds and recent deaths which can be more universal and pervasive.

Yellow and Orange are unusual colors with multiple positive and negative assocations, especially the association with fire, which can be vital to survival and deadly when uncontrolled. This is why there is often a "neutral" valuation with such colors.

Conversely, darker and more desaturated colors are associated with "bad". Darkness is the clear association here, as darkness conveys the unknown and unknowable. For the same reason one is much more likely to be scared of the dark than to be scared of the clear daytime, so are darker or greyer colors more likely to evoke negative associations. Black of course is the color of complete darkness, the elimination of the primary sense our species uses, resulting in a color easily associated with negativity, fear, death, and more.

Conclusion regarding the question of "What is the most common representation in games?"

The most common associations would be one of a few alternatives.

If I recall my Starcraft to a decent degree...

The player was Red, neutral units were usually either yellow, or some gray, un-themed color, and the enemy's color might vary at times. (Blue confederates, Purple zerg). For the player, you may want to pick whatever color seems to most closely fit the theme of your game's units, then think about other colors for enemies as needed.

I like the suggestions from users Philipp and Mikolaj. Another variant came to my mind when I read that you have a neutral team, and that is using "forrest colors". So here is my suggestion:

Not the answer you're looking for? Browse other questions tagged game-design color .

3
what making a good soundtrack for social game
309
How can I find an optimum set of colors for 10 players?
10
What's a good alternative to colored tiles to account for color blindness?
3
The meaning of colours in other cultures
0
Can I linear interpolate color along both the X and Y axis of a circle instead of using the distance formula on each individual point?
2
Is it a good idea to give NPCs unnatural hair colors while keeping that of the PC a natural color?