How can I achieve smooth shading / glow from one tile to another?

Looking at the absolutely wonderful Pixel Dungeon that has a similar scheme, it has an effect where the dark/black tiles sort of "bleed" into lighter tiles (image from the game's Tumblr): 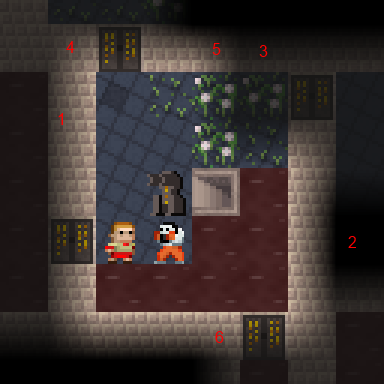 Look at 1 above - the area beyond the wall is dark, the wall itself it lit, but the darkness "glows" and creates a nice transition to light. There's also a slightly different "glow" from black tiles to light tiles, as seen at 2 - it's darker (you can't even see the edge of the wall).

I'd be delighted to implement something similar, and if I just want the effect as seen at 1 and 2 I can just create appropriate overlays, something like:

It's not that simple, however:

So I'm looking for some saner solution to achieve this lovely effect.

So far I've had these ideas:

I'd be happy for some input about these proposals as well as any other ideas for achieving this.

I'm using Libgdx and Java, but I have a feeling an answer will not really depend on the framework being used.

One method you could try:

Create a texture that has one pixel for every tile (visible on-screen). Then for each tile, set the corresponding pixel to black, 50% grey, or white, and finally, use that texture on a quad that covers the entire scene using a multiply blend. No need to worry about which corner has how many lit/dark neighbours, and OpenGL texture interpolation (make sure filtering is set to GL_LINEAR, not GL_NEAREST) will make the smooth transition for you.

The best part is that it also enables any kind of lighting you want, just in case you want a 75% grey area, or a bright green light somewhere.

If you have smooth scrolling, you will need to fiddle with either the texture coordinates of the quad, or move the quad itself, to account for the current sub-tile scrolling position.

Not the answer you're looking for? Browse other questions tagged tiles libgdx .

8
Making a symbol appear on any colour
2
How can I achieve smooth animation of sprites between discrete tiles?
1
How can I make a tile appear on top of another without completely blocking the tile below?
0
How to achieve selection of a tile from a tile sheet based on an ID?
1
Best way to load texture2d tiles in xna?
0
Efficient approaches to updating adjacent grid tiles when one tile is disabled?
1
LibGdx - How can I correctly handle tile transitions / connected textures?
5
Where to cast light/shadows in a 2.5D view?
8
How can I implement smooth tile-based lighting?
1
Unity shaders - blend edges of tile textures stored in an atlas