How do I implement a programming system in my game that is both accessible, powerful, and fast to code in?

I'm currently working on a space-based sandbox game which will heavily feature the ability to custom program your systems. I want to implement this in a way that is both

Text-based languages generally only satisfy the latter two requirements, and while it's not to difficult to design a visual language which satisfies the first two, visual languages are a pain to program in due to requiring extensive mouse use. While there are some very accessible text-based languages, I want complete non-programmers to be able to ease themselves into programming.

Really, the only way to have all the features is to implement multiple interfaces. Accessible and powerful are often two ends of a spectrum. The easiest way to do this is to implement a powerful system, that has an additional interface to allow beginners to interact with the system in a intuitive way.

Allowing for a system that allows beginners to program visually, perhaps something similar to the Lego Mindstorms programming tools: 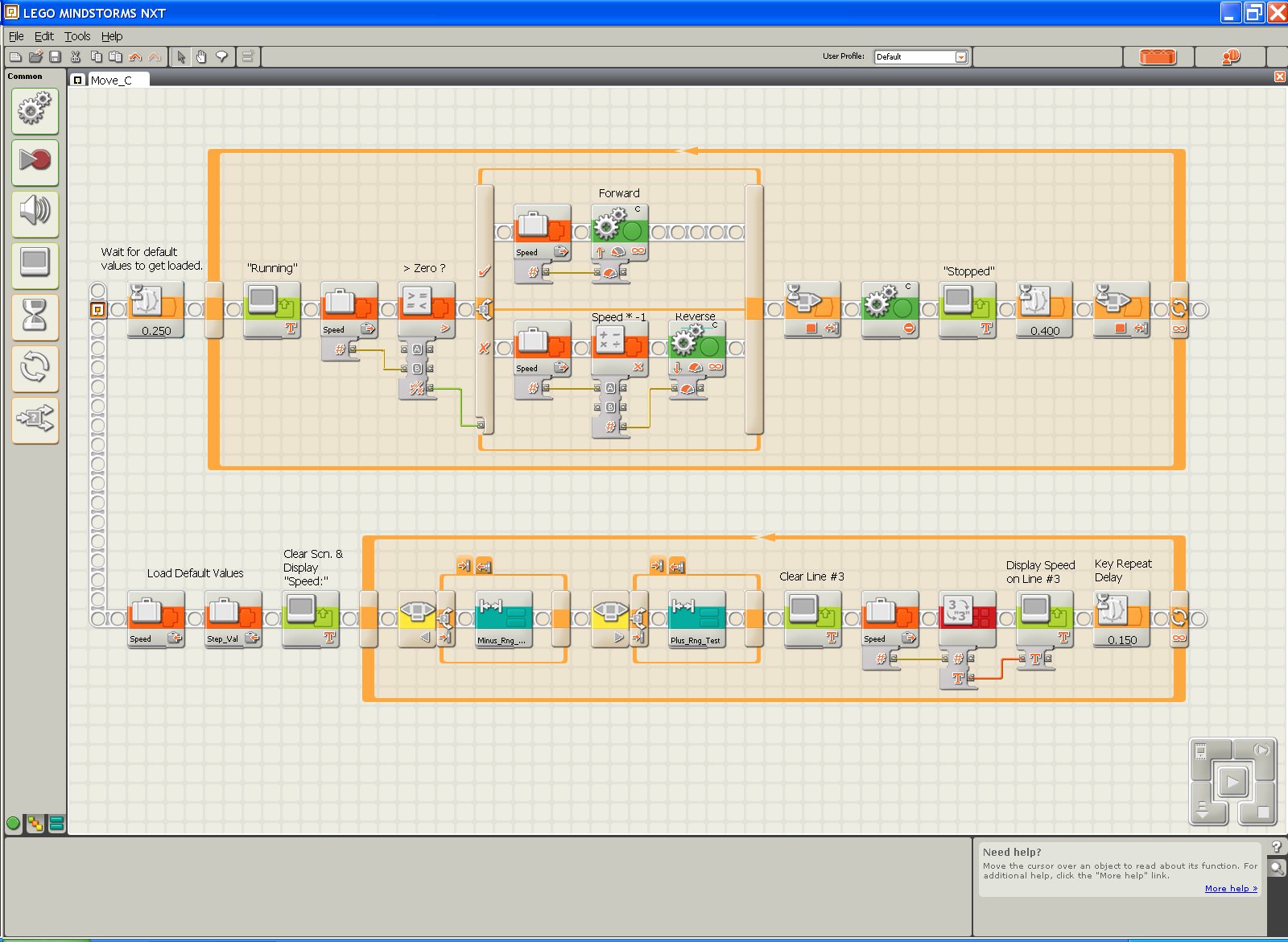 Where there are drag/drop components. The components have inputs and outputs. Components can be simple things like AND, or OR gates, or more complex like a test for nearby enemies.

Ideally the visual representation should be compiling a written language script in the background. This offers a powerful tool for learning the language too. If a beginner can "write" their program visually, then read the code it produces they're far more likely to understand it and be able to modify the code produced. Eventually being able to write more powerful code than the visual tools alone allow. This fulfills the requirement of easing users into programming.

The backbone of the system, of course, is a written language. The visual tools are just to give users a fast way to program something simple, and allow for beginners to get started.

The written language allows for advanced users to do advanced things. And you can even allow users to create their own components, by making custom scripts. Then they can re-use components they made in a quick and easy interface for fast programming.

You might want to have a look at Google's blockly, they combine the visual elements with recognizable programming terms whilst maintaining a fairly decent level of accessibility.

You can have a look at the Maze demo for inspiration, many of my non-programmer friends were capable of getting most of the way through the puzzles using it, satisfying at least some of your criteria in effect.

I'm surprised this hasn't been mentioned before, but MIT's Scratch uses a block interface that is fast to code in. It allows users to create their own functions and can get surprisingly complex for a language that was built to teach kids how to code.

Stencyl is another example of block coding that does something more similar to what you're wanting. Coding with blocks like these is much more efficient and less time-consuming than visual programming interfaces like those used by Lego NXT. Stencyl allows users to code in either Actionscript or blocks.

I apologize for the lack of pictures, I don't have enough reputation to post images yet.

BPEL programming language has visual representation and many tools that work with it. It is a workflow language, not a programming language, but it is turing-complete. It is verbose, but it is easy to write for both programmers and business people and it's easily translatable from visual to textual form. I don't think it would make a good game-language, but it can serve as a source of inspiration. And given the amount of BPEL engines and tools, it should be possible to reuse some ideas and/or code.

BPEL-like language will not feel like programming, more like routing and connecting systems. So you can have a targeting system connected to a gun system with some logic in between.

That's about the quickest way I can think of to get all the candy with no too much pain. You get the click'n'drag noobs as well as the vim-geeks on board. And if you keep the mechanics simple (e.g. Trigger -> Condition -> Action), then you don't have to spend the man-years in developing an UI for an powerfull and still easy-to-use graphical script editor.

Some examples to clearify what I mean:

Not the answer you're looking for? Browse other questions tagged game-design software-engineering or ask your own question.

14
How to implement an experience system?
2
How to implement physics and AoE spells in an MMO game?
4
How do i implement a hit box system in a fighting game?
0
How could I implement programming as a mechanic?
47
If I design a game that has both guns and melee weapons, how do I make them equally viable?
1
Why would a game engine developer use both DirectX and OpenGL?
4
User magic creation system that isn't programming