I'm developing a 3D physics engine (I know, I should use one of the many good existing physics libraries, however my collision detection is optimised for objects with highly ordered highly complex substructure which seems to be unusual and slow in the engines I've tried).

Collision detection is working really nicely, as are bouncing type behaviours but contact behaviours are not behaving nicely at all. Initially I had the problem that an object would spin up out of control if it had prolonged contact with a surface; I found that the reason for this was that an object was falling under gravity into collision, then getting a "free ride" upwards while it was pushed out of collision; giving the object free energy. If a significant portion of this energy made it into rotational degrees of freedom then considerable energy could be imparted before eventually the object was flung outwards. My solution to this was to impart an energy penalty when pushing out of collision equal to:

This improved matters considerably, but now objects "get stuck" on their corners just before the shape relaxes into its resting position; presumably because too much energy seems to be being taken away.

A loop round the engine works as following

I've taken friction out of the equation for the time being

I’ve found that while in contact with the surface the contact forces correctly bring the two objects at their collision points to zero relative velocity (taking into account both translation and rotation) but that that balance of translational movement balancing rotation is instantaneous. I.e. over a complete physics step the rotational component changes to be no longer in perfect balance with the translational. So a very small push-out-of-collision is required even when in ‘contact mode’ with a very small energy penalty to boot. However this energy penalty seems too large; freezing the object in position. 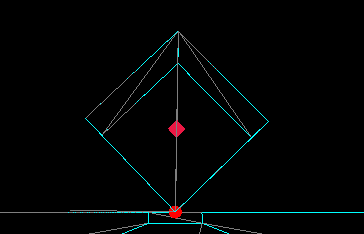 If I understand, you currently apply a collision impulse--an instant change to linear and angular velocity--with the goal of bringing the relative velocity of the contact point to zero.

However, the point may still be penetrating, so you try to "push out" of collision using either force (over time) or another impulse. A problem with this approach is that, once the contact point is free of penetration after the next frame or so, it continues moving away (undesired for resting contact).

To resolve the penetration, instead of an impulse, you may consider applying an "offset". (I don't know the correct physics term here because I've never seen this discussed.) I just mean an instant change to linear and angular position, with the goal of bringing the penetration depth to zero. The math (how much to translate the COM? How much to rotate?) is similar to your impulse calculation (involving mass and inertia tensor).

Not the answer you're looking for? Browse other questions tagged collision-resolution physics-engine .

8
How do engines avoid "Phase Lock" (multiple objects in same location) in a Physics Engine?
4
Friction due to gravity in an impulse based physics engine
17
Resolving a collision with forces
2
OBB Collision Resolution: Jittering with Long Rectangles
3
Game Physics: Calculating a collision response using the Separating Axis Theorem?
8
How do I prevent jitter amongst near-stationary physics objects?
1
Minimal, unrealistic physics engine
2
How do I calculate impulse when an object collides with plane(fixed object)?