Before I get started I would just like to say that I have been using the Microsoft Winform + Xna examples found here:

I think I somewhat understand how its working however I'm running into one major problem. I'm trying to draw a Texture2D image to the spriteFontControl's spriteBatch parameter, which is an object of the XNA SpriteBatch class, and when I do I get this red "X" on a white box that fills the entire spriteFontControl area. This is a screen shot of what it looks like: 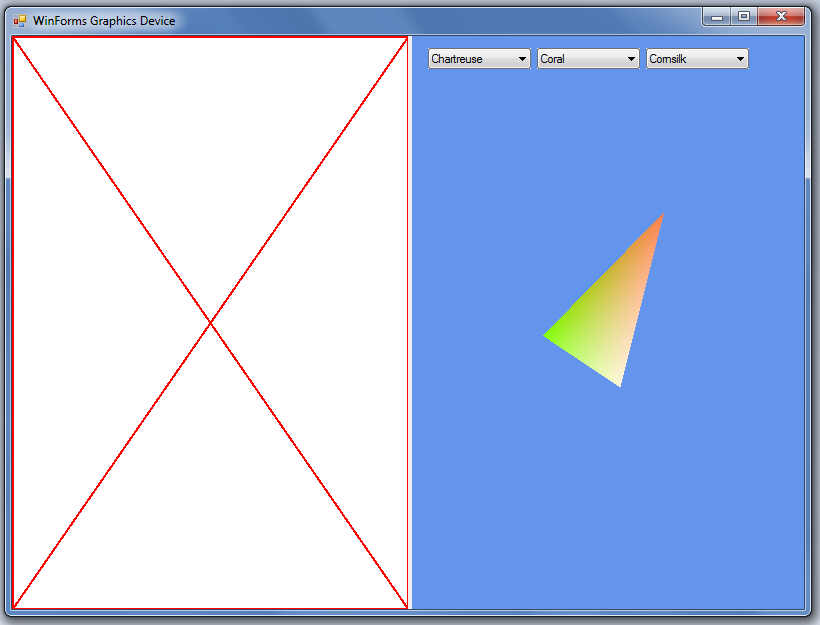 If anyone could please offer some help as to how to draw Texture2D images in the Winform + XNA example then that would be most helpful. I heard that it was made so that you could draw it just like you would in XNA but I think I'm still missing something.

P.S. This is the code from the Draw() method of the spriteFontControl:

you are throwing an exception...

you should ensure that "spritebatch" and "box" variables are not null.

Instead of creating a game in a form, create a form in a game.

In your initialize method:

this way, you should have no problem loading anything without problems. It's simply a game that has controls. Much easier than the other way around, because you get no "game loop".

I've used this (created an automatic method that gets called everytime the window is resized and when it's initialized) and it sets the viewport correctly and works just fine.

I've only encountered errors while trying to get a Game work in a Windows Form. Much easier the other way around.

Not the answer you're looking for? Browse other questions tagged xna c# windows-forms .

2
How to design a GUI / controls system classes

3
Dealing with 2D pixel shaders and SpriteBatches in XNA 4.0 component-object game engine?
2
Using SpriteBatch with BasicEffects and layerDepth creates negative Z values?
0
XNA Texture2D positioning problem
1
Drawing sprites to a permanent Texture2d using Monogame / XNA
3
Is multipass rendering possible with SpriteBatch?
0
XNA/Winforms - Nothing being drawn after calling SetRenderTarget(null)
1
How to draw to a surface, then draw that surface to the screen
1
Drawing on an image before drawing on screen in XNA using VB.NET