Using random numbers with a bias

I appear to be awful at describing the question so I'll try and describe the problem.

So random number generation isn't the problem, but controlling and actually using them in a game is. :D

One way to do it is to apply a power function. Start with a random number in [0, 1] and then raise it to the power of some positive number. Powers < 1 will bias upward, i.e. the numbers will be more likely to be higher than lower within [0, 1], and powers > 1 will bias downward. Then use multiplication and addition to shift the range of numbers from [0, 1] to your desired range. In pseudocode:

Here's a plot of the second example: 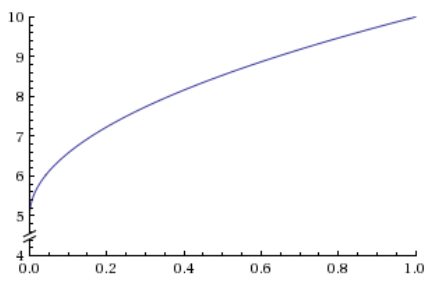 The usual answer will be some code that can tweak the random number distribution to give you the properties you want. I'd suggest instead working backwards:

I don't yet have a great description of this technique, but I've written a little bit in the “Designing your own distribution” section of this page.

This approach probably won't work for everything but I mention it because tables are nice for designers to edit, and the designer is not limited to existing mathematical functions but instead can choose any arbitrary wacky shape. For example, if you decide that a prime number of heads should be unusually rare, that's easy to write in a table, but it might be harder to find a mathematical function that fits that shape.

I have a harvest system implemented in my game that utilizes rejection sampling. Each item has a weighted chance of being produced. It's easy to assign weights to certain items and get one randomly using that weighted chance. This is similar to your situation, except you don't have harvest items, you have number of heads. So, you'd first assign a weighted chance to each head count value for the values you want.

So we have # of heads : weighted chance

The weighted chance values don't have to add up to anything specific, but you should know that they are going to be relative to each other.

Then we go through and make a list of them all:

It's log(n) if you have a pre-compiled list (if you don't have conditions you can do that).

Not the answer you're looking for? Browse other questions tagged java procedural-generation random or ask your own question.

29
Continuous weighted random distribution, biased toward one end
4
Set a 'chance to spawn' for each GameObject in an array
0
How can I implement a percentage chance to perform some action?

0
Combine n Gaussian Probability Sets in a limited float range
10
Reduce the number of edges of a graph, keeping it connected
12
Random numbers on C++
19
How can I generate random maps that feel like Age of Empires II random maps?
18
Matching a chunk of procedurally generated world to a chunk of other world
3
Random numbers with a left or right biased skew
10
Procedural Generation, Game Updates, & Butterfly Effect
3
Procedural generation of evenly distributed random points (2d)
4
How to make my Diamond-Square-algorithm less 'random'?