I´m having a rough time trying to figure out a proper way of dealing with key mapping and key bindings in unity. The built-in unity input manager is useless to me since it doesnt support key mapping ingame and you cant acces it via script, you can only change your key bindings on the game laucher, but not ingame.

I guess I will need to create my custom InputManager to replace the unity one but im pretty much lost in this matter. So far I´m beein doing some research and now I know how to create a basic but robust input manager in C++ (thanks mainly to this tutorial http://www.gamedev.net/blog/355/entry-2250186-designing-a-robust-input-handling-system-for-games ) But as i said I dont know how to translate this into unity c#.. My first idea was to create a complete new input manager from scratch that use an xml file to store the key binding data, but I dont know if you think this is the wrong way to follow. First of all I dont even know how could I acces RawInput in unity. Checking the script documentation was of no use in this matter, i found something about keyboard events but they only work under OnGUI function and I dont know if i should use it then...

I know there are some commercial plugin out there for that solve this purpose but thats not the point, I´m trying to do it this by myselft

Could someone explain to me how could I make my own InputManager from scratch or give me some indication to put me in the right way to this?

I apologize for my bad english btw

Im trying to achieve just the typical key mapping menu but I must be able to access this menu ingame, i mean, via pause menu. ingame->pause menu-> options-> controls. for example, I have the jump action mapped to the space bar, In my controls menu I select remap this this action. A dialog propt and wait for me to press the new key to map to the jump action. I press ctrl (or whatever key)...and then I update the dictionary, jump action = ctrl (or whatever keycode it is). But the issue is, how do I know which key did I just pressed while the dialog waiting for a new key was active? Should I use something like:

or if not just a bunch of if statements, one for each keycode of the keyboard i mean

what surely will work but just use about 100 if statemens

I hope I explained myself clearly now. Anyway I was doing some research before start writting any code but I will do a script what I thought so far and then post it for a better understanding.

If you want to build an input map around this, then you could write an input manager that sits "in between" the unity input events, and your own event system. An input map would esentially be a one to one or one to many relationship of input events, to unity key events. Updating which keys are tied to which events could be very reasonable achieved. The simplest way to do this would be to store a dictionary of KeyCodes, and a list of the events they are registered with, and simply update these event lists if necessary. Additionally, serializing this information to an xml file would not be unreasonable at all, especially with the extensive and easy to use system that .net provides.

The story like this.... Unity Input Manager pain is lasting for years. On Unity site you can find request on the forum for InputManager programmatic access dating from 2004, and feedback from 2009 with state planned today 2014.

Below are some of the problems.

2) Handling input in code based on states/tag abstracting real input. Some sort of abstraction is done thru InputManager well known "Horizontal" and "Vertical", but that abstraction is still bonded to axes and buttons and not to actions/states of the game(one of those might be AnimateStates of Mecanima).

3) Saving and restoring user preferences PlayerPref might do the trick if you not plan to support Web, Droid and if file size is not bigger then 1 megabyte. File type that can be readable by humans and machines, and easy exchangeable( players can exchange their game settings) between them might be XML.

5) OS independent driver and easy expansion with drivers supporting other devices and special properties Unity internal input handler might not recognize the controller or it will identify layout in different system differently and would not offer support of device extra features like force feedback, IR pointer, accelerators, gyros ...of modern input controllers. So instead of use pluggin-paid OS dependent drivers, seem much better OS dependent HID interfaces with OS independent pluggable drivers.

7) Create combination of inputs that would trigger action/state Unity doesn't offer out of the box combining input action like 2 keys in row,button press and axis move, ....like in fighting game scenario 2times joystick left + fire (Mustafa kick Cadillacs and Dinosaurs)

8) Handling inputs by events Seem whole Unity engine is not much planned as event, signal or reaction based system and encouraging of use of Broadcast messaging and handling complex input inside Update is far from good solution even if you need last processor ns.

9) Plug and play instead of plug and pray. Attach or remove controllers while game is running and continue playing. If you using "Any joystick" option hot seat multiplayer isn't an option. Joystick numeration might be change on while replugged.

If you expect few lines of miracle code u can dream of it. So the answer is make robust clean solution or use some of existing. From existing don't use that one like CInput or InControl that are wrappers of Unity InputManager would get same hackish trouble soon... You can try Rewired or you can try my solution so you not reinvent the wheel First you can start mapping even in editor.Save.

and then remap in game.Save.

works with OSX,Win,Droid and Web 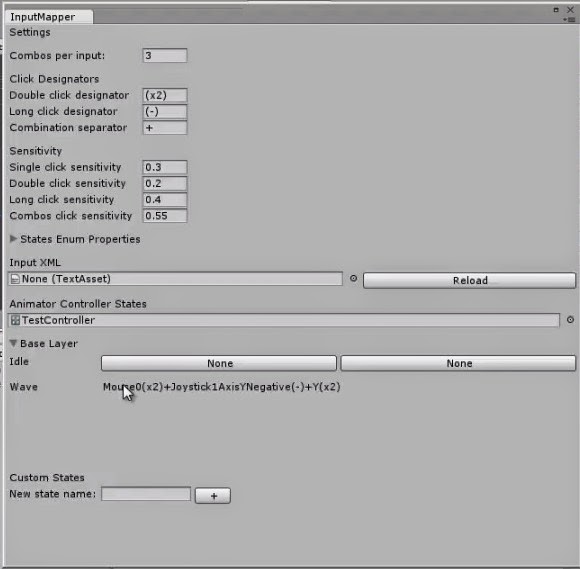 You can set modifier format or clicks sensitivity.

3) Saving and restoring user preferences Saving would export your settings to .xml file and States.cs will be generated containing enum of your mapped states.

Now you can forget about:

2) Handling input in code based on states/tag abstracting real input. InputMapper API are very similar to Unity API's with the big difference and that is abstraction on 2 levels.First you not program with real inputs like KeyCode.Q or Joystick1Button99, but with states which also allows player to map different input to same action state.

4) Recognize positive and negative part of the axis. System recognize Forward,Backward,Left,Right of POV axis and Positive/Negative of normal axes.

8) Handling inputs by events As Update method get overcrowded, library offer modern input handling solution by use of Event based system.

Hardcode developers can manually map input to states and even mix with loaded settings.

In KeyCodeExtension all KeyCode stuff are supported plus additional for Joystick Axis mapping.

5) OS independent driver and easy expansion with drivers supporting other devices and special properties I understood Unity couldn't support all game devices but some system that allows simple binding of driver might be good idea (Yeah they have pluggins.....).
So instead building pluggins for all OSes, you use InputMapper system built-in mini HID interface systems for (Win,Web,Droid and OS) and OS independent driver. (Yes you can make C driver and compile in anything...) Device would be handled by default driver (WinMMDriver for Win and OSXDriver for OSX) or by custom driver if added like this:

ResolveDevice where HIDInterface provide device info from the OS, you can check VID and PID to decide to handle and init device properties and structures, or not returning null, and Update function to query device by use of provided Read/Write methods methods and fill the JoystickDevice structures, so can be accessed by InputManager. Scare about handling few bytes??? :)

Originally OS implementation of ResolveDevice point is by using Report HID Page from device description, but that restrict using devices that aren't planned to work with that OS, like Wiimote,Xbox Gamepad... In Input Mapper you need simply to extend JoystickDevice Class, which already contains some basic functionality supporting axes and buttons, by adding specialized properties of device you are planning to support.

Update point is synchronization point with Unity. System use high level synch and async ReadXXX methods and return buffered byte array. What each of bytes means is easy to decipher as there are many web sites about any devices. Developer task is to fill JoystickDevice structure with values processed from byte array returned. Write methods are used for setup the device...like light leds, start FFD, enable disable....

Still want to use Unity InputManger as backup

Im not sure if this will work, I haven't actually tested it.

Now you could write your keybindings to a simple text file. And just set those variables when you read them. ( havn't tried reading text/xml/json files in Unity but im sure it's possible )

The idea here is that the keys are stored in simple variables. Which you could easily change. It should be trivial then to read/write them away. So making an interface in game where you can set your keys shouldn't be a problem either.

You can use a Dictionary to map KeyCode to specific action, eventually you can change this at runtime:

Btw it seems that Unity does't expose any method that returns a list of all pressed keys, so the code above isn't very elegant. Hope this help.

Not the answer you're looking for? Browse other questions tagged unity input scripting .

11
Nested input in an event-driven system
0
Input handling with callbacks
0
How to show a popup with text when a game object is selected?
1
(How exactly to use EventSystem?) Assigning string Name to UI Button in Unity without CrossPlatformInput?
1
Unity method/framework for handling different input modes
0
Object jumping when it shouldn't - Input.GetAxis and booelans used - no raycasting - Unity
0
How can I switch the default map to UI in order to pause the game?
0
Trigger Button with specific key only