I'm designing a game reminiscent of Elite or Escape Velocity, those old space trading games, where you play a traveling merchant in space.

I'd like to have the game's economy at least resemble a real one. What resources are available that I could look at to get an understanding of the algorithms I'll need to perform the simulation?

One big hurdle is that I'm pretty horrible at math; so a simplistic explanation would be ideal.

I figure an interstellar economy wouldn't be all that different from a global one; certain things can only be manufactured in certain places (due to resources and technology levels), shipping things takes time and money, people in different places need different things... just instead of cities, they'd be planets.

A Google search of "economics simulation algorithm" and similar terms turns up little of use, and nothing I've got the background to understand.

Anyone know of any useful resources I could look into?

Now depending on how your game works, if a player can buy a product from a far away region from anywhere in the galaxy then price displayed should be offset by your transportation cost.

What I find works best when im playing a game is models that shift by themselves. Each and every transaction that takes place in your market will have a knock on effect not just on the thing that was being traded but to the market as a whole. Links to products on a market can effectively be traced to virtually every other product on that market ...

Look at the real world, a barrel of oil makes more than 1 product, from fuel, to plastics.

But metals need to be proccessed before they can be used and then manufactured in to drills so the metal workers need oil.

And that's a very basic example, when you consider something as complex as your mobile phone it goes completely bonkers.

How I would go about this:

Start with a table that contains all your products and give them an arbitrary value (don't worry if your model is any good this should sort itself out later).

Now set a load of rules and implement a method / function to implement them.

Now you can write some sort of GetPriceOf(Product product, Location system) type function that determines based on the output of a chain of rules what the price of the given product might be in the given system.

Then just keep building and building on it until the model feels real. It'll likely never be perfect, very few companies actually get it right and even when they get it right it's still not real like in the real world.

The other thing you could try is making money as hard to come by as in the real world then based prices on the real world stock market ... could be a bitch to wire up to your game though.

You can create a "flow of merchants" system which edits the routes' popularity based on the length of the journey and the income and adjusts the prices according to the amount of goods transported there. In other words, simulate other merchants(not individually, but via "popular routes") that influence the economics as much as you do.

Although this may seem like a bit of a cop-out, it is worthwhile to note that no one can make a provably accurate model of space-faring economics because we have no examples of it in real-life.

All examples of space-oriented trading simulations make their own science fiction assumptions about how their universe works, and most of them take the Planet of Hats approach to alien worlds, in that, despite planets being huge and diverse things, the worlds are culturally very small and limited and possess only one real identity. With this kind of view on planets, it is consistent for them to have only a single, simplified economy for each of them - however, this is certainly a massive simplification of what might occur in real-life.

In other words, if you want realism as your primary goal, then you should know that it is unlikely that there has ever been (at least that I'm aware of) an economic model that is even close to being both realistic and on the galactic scale. Although it may be useful to use real-world economic models as a starting point, there is no guarantee that it will be even close to accurate. There is a measure of fiction, imagination, and utter guesswork that is simply required to make this work.

I have played a mobile game called Galaxy on Fire, where you would be a space pilot. You were supposed to travel between solar systems each containing 6~ space stations orbiting planets. Each station had its own shop, with its specialities, beverages and whatever you might think of.

Here is the Galaxy on fire 2 Galaxy Map. Taken from the GOF Wikia 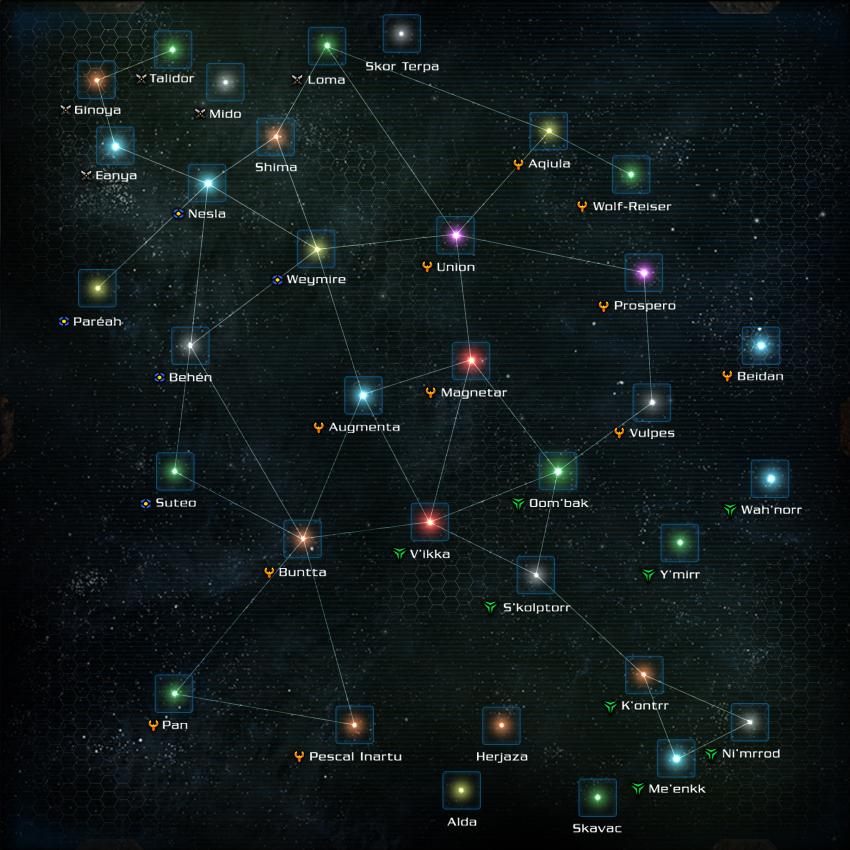 The market would be reset every few space travels. With various commodities added randomly. In the top left corner of the map. There has been the most remote station Talidor. Lets say, it has been the only place where you can buy the "Talidor Tonic", it's price would be approx 2k in that station. The approximation would be completely random (I think FishLabs made it +-7% of the initial item value) to give the player a feeling of reality. The Tonic's price is highest in the other corner of the galaxy on Ni'mrodd 9 solar systems away. Where the price would be much higher, Lets say, for instance 190% of the initial cost making you earn 1800 credits from each Tonic you sell. If I were to set up that system I would make one, or more "production" sites, and the further you travel the more +X percents you will get to the items value.

If you feel strong, you can also make more "production sites" which would change the items value using the simple arithmetic mean, using the same method as before "The more times you have to travel, the more the price will rise".

All the values, along with the % the item will rise every time you move up the map can be reset every few travels.

Not the answer you're looking for? Browse other questions tagged mathematics algorithm simulations economy or ask your own question.

6
What economic books would you suggest for learning about economic valuation of goods and simulations thereof?
16
How could you parallelise a 2D boids simulation
6
How do I calculate market share in an economic simulation?
1
2d block based game storing water simulation
0
gravity simulation implementation