Determining which line to collide with

I am making a platformer, where my player is represented as a circle and the ground is represented as lines. The actual collision detection and resolving works, it's just an edge case I can't find a solution for.

I check on which line the hero is by using the normal, and if the hero's center is between these normals I know he is on that line. That works except for the case in the image above. When he get's in the 'Problematic Area' the algorithm will not detect any collision.

So how do I know which line to pick for the collision when the hero get's in this area?

Here is some code that shows how I test collisions (which again works, but does not consider the problem I actually have).

A circle may be a bad choice. A rectangle (AABB) allows you to more easily use SAT here, which will in this case detect the bottom edge of the AABB as the normal.

Another option is to recognize that you don't just want line collision but also vertex collision. Using Voronoi Regions, the circle is in the region belonging to the vertex joining the lines. Using the normal between a vertex and a circle will give you the vector pointing from the vertex to the circle (or vice versa) which is exactly what you want. One way to handle this is to calulcate distance to any candidate vertex, then calculate distance to lines. When doing the line distance algorithm, you generally must clamp a t value to [0,1]; just ignore the line if the value is outside that range. Take the shortest found distance.

Yet another option I've never seen used but might work is to see that the circle collides with both lines, take both normals, and average them together. I don't think that's the best solution, but maybe it's the easiest option for you.

Circle/line segment collision is the same as point/pill collision. A pill can be simplified as a box and two circles on the end points. Using your existing code you are only half way there. If you add point/circle collision to the line segment endpoints (and simply resolve your collision with whatever hits first) your problem goes away (as both line segments will have identical circles at that point), and you gain proper end point normals from the circle collision.

Here's a rough diagram showing what I mean. The gray lines are your original lines and the gray circle is your player's bounding circle. The collision resolution of that is equal to the black point of the circle and the black lines and circles that are extruded from the line segments that make up the box. 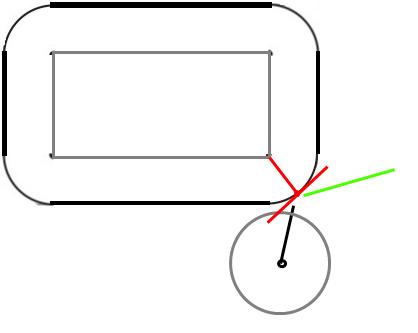 There's more detail in this question: A ball hits the corner, where will it deflect?

Not the answer you're looking for? Browse other questions tagged collision-detection or ask your own question.

47
A ball hits the corner, where will it deflect?