I'm trying to create pixel perfect collision detection but I don't know how to handle collisions when there is a jump. Here I have one image of a sample map: 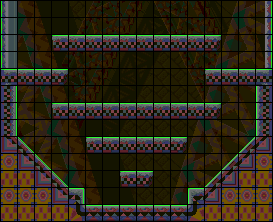 But maybe I had a bad supposition assuming that all the pixels are little collision points.

I have been treating each axis collision split, but that is bad done when diagonal jump have been made, cause you'll get an error in x or in y while correcting the position.

Then I thought that maybe I was wrong in my supposition that I didn't need to split for pixel collision type.

I will resume it in 2 questions:

I use masks to do pixel-perfect collision checks between my player and enemies. (I don't ever feel the need for pixel-level precision when it comes to platforms and walls.)

A mask is essentially a silhouette of a sprite, using 1-bit per pixel to encode where the sprite's image has transparency and where it doesn't. Many engines and libraries have built-in functions for creating masks from images and checking for overlap between masks.

For one-way platforms, I usually create a boolean attribute in my platform class called "is_one_way", and set it to true for platforms I want to be one-way. In my collision code, if the wall is one-way, I only resolve in the event that the sprite is above the platform and his y-velocity is positive.

There are different approaches you can use. For a start, I'd use a rather simple (maybe even a bit naive) approach:

You're essentially checking two points on your character for now:

Checking left/right works in a similar way. Doing this right will also solve stuff such as ramps instantly for you.

Reading through the poitns above, it should be clear, that you essentially "bounce" the character instead of having him standing still. This is true, but the player won't notice, because you don't draw inbetween these steps.

Not the answer you're looking for? Browse other questions tagged collision-detection collision-resolution platformer or ask your own question.