An object twice as close appears twice as big?

So I was thinking about creating a 2D game where you can also move along the Z-axis, by changing in which layer you are. Depending on the depth I want to scale my 2D sprites.

Once, someone had shown me a demo in which he had a lot of 2d sprites, and by scrolling he could change the depth of the camera. So when zooming in, the objects would come closer to the player, and appear bigger. Then I wondered, how much bigger should an object be when it gets 1 unit closer. How would you calculate that? So the guy told me: There is one basic rule I am using: "objects twice as close, appear twice as big."

Now, by testing it myself, I know that rule doesn't apply in the real world ;) But is there some constant that is used in real world calculations for perspective or something? Or a formula?

I know this might not be the best place to ask such a question, but since this is the only site I use for game-related questions, and my context is a game, I thought I'd give it a try. Also, I am kind of expecting that there is this person here that knows everything about 3D perspectives and matrices or something, since it might relate to 3D games ;)

"an object twice as close, appears twice as big" That is not true in the real world. But which constant or formula is correct?

Generally it is true, depending on your view point and in which direction it has moved, as well as the viewing angle. 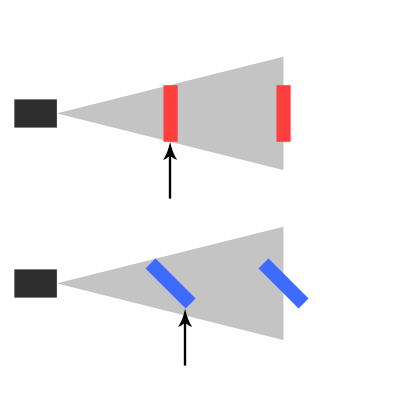 Note how in the first camera view, as the Red block is perpendicular to the camera view, the object seems to be twice as large in a perfect 1:2 ratio (Note the arrow pointing that it hits the edge of the view after being moved twice as close)

The second is the same size block rotated at 45 degrees. As it is rotated, the bottom edge is no longer at the same distance from the camera as the top edge, so it does not SEEM correctly scale to a 1:2 ratio but it in actual fact is twice as large (as it is at the same angle on the further away blue block as it is in the close blue block.)

In conclusion this actually means your friend was correct and a 1:1 ratio ("objects twice as close, appear twice as big.") for your objects is a good choice.

An object twice as close does appear twice as big. It is a consequence of Thales's Theorem and it is true in the real world.

One could argue that Thales's Theorem is the core mathematical tool behind perspective projection and what's known in the graphics pipeline (OpenGL or DirectX) as perspective division. It a theorem you should definitely know, and learn to recognise when it can be used.

Since you're not actually working in 3D space, we can assume the sprites never rotate (rotation can be simulated with skewing, etc.) This simple constraint makes it pretty easy to get somewhat accurate numbers on what the size should be depending on distance from the camera.

First, you need to understand how 3D objects are rendered. Even though a camera converges to single point, there is an invisible plane that acts as a screen on which to draw the objects. The only thing you need to know about the screen is how far away it is from the camera.

Here is a diagram of how an object is rendered to a camera at two different distances.

Some basic trig calculations will lead you to the following formula:

I would suggest starting with v=5 and then adjust from there based on how it looks. I may throw a fiddle together that allows you to see the changes in realtime.

EDIT: When you say move along the z-axis I'm assuming you will want a perspective view (like most 3D games; shooters, etc.) The math to calculate object size based on distance will also depend on location in the frame, similar to peripheral vision. Instead, I would try it with my math which is an orthographic view (think Mario, Angry Birds, Super Smash Bros, etc.). I don't know the look and feel you are trying to achieve, but as long as it seems real then the players will never know!

You have to define "twice as big". A line will be twice as long, or tall, at half the distance, but simple mathematics tells us that the surface area of a rectangle, for example, is the height multiplied by the width. The result is that any object with both length and height will be four times as big at half the distance. Binoculars with 8x augmentation will show objects other than lines to appear 64 times bigger.

This wasn't covered and I thought this might be beneficial: It should be noted when you half the distance, doubling the size in both X and Y dimensions will quadruple the total area of the sprite. This is because:

This may give you the impression that the zooming effect is happening quickly or is too intense. You can adjust the factor by changing 2 in the above formula to a float value like 1.5 or 1.33 instead.

Alternatively, what I've done is store camera depth (distance) to your tiles in a byte value along with camera translation (X and Y) then calculate projected tile size thusly:

Note that CameraZ has to be strictly between 1-255, and that restriction may be a benefit or a bane to you in the future.

Not the answer you're looking for? Browse other questions tagged perspective objects .

7
Vector games (Wireframe, Elite-like) theory and implementations?
3
Trying to understand 2D vector -> projection space conversion
5
Mapping 3D object coordinates to 2D screen coordinates with perspective projection
8
Isometric graphics with fake perspective
12
How to randomly place entities that don't overlap?
0
Moving an object extremely close to the camera at a constant speed makes it visually speed up
2
Simulating a real camera's perspective projection
0
How to handle player slowness while moving up and down in a Top Down game with angled ortho camera and angled sprite due to stretching of ground?