Can you use well known buildings in your game?

Is it legal to reference a real city in your game and use the same architecture of well known shops and buildings?

For example, I'm sure you can't create an exact 3D model of McDonalds, put it in your game, and sell it. However, is it possible to use the same architecture, but different name? and even use the same colors, just as long as the name and logos are not used? Or would there be the possibility of getting in trouble for creating something in the "likeness".

First, a disclaimer: I'm a lawyer who practices in California, but this post is not intended as legal advice. "Is it legal" questions are inherently not a good idea for the stack exchange format. Different jurisdictions have different laws, and in many jurisdictions, offering legal advice absent a license constitutes unauthorized practice of law (i.e., it's a crime). Moreover, you should not rely on advice you find online to determine whether some conduct is legal or illegal. Finally, circumstances vary. Whether your use of architecture is lawful or unlawful may depend on specifics that are not provided by your question.

So the real answer is: consult with a competent lawyer in your jurisdiction.

Having said that, by way of background, I can tell you that there have been lawsuits related to allegedly unauthorized uses. My favorite example is E.S.S. Entertainment 20002, Inc. v. Rockstar Videos, Inc., et al., 547 F.3d 1095 (9th Cir. 2008), which involved Grand Theft Auto: San Andreas, and the allegation that the game infringed on an actual strip club: 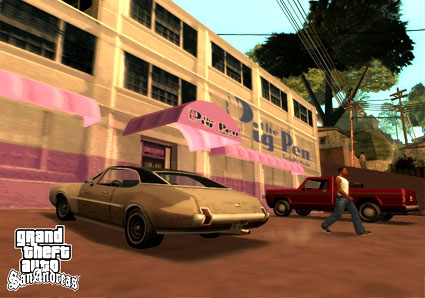 Rockstar prevailed in that lawsuit on first amendment and fair use grounds, but that does not mean you would, nor does it mean that the matter was cheap or trivial for Rockstar to defend.

If you're considering using a real building or, for example, parodying it by tweaking the name PlayPen to PigPen, you may someday find yourself answering questions at a deposition like this:

I think you basically have answered your own question by pointing out that you couldn't copy a McDonalds. That is, if the answer is "Yes" for a McDonalds, it is "Possibly" for other buildings.

Unless I suppose you are modelling old or historical landmarks (Ancient Rome, The Alamo, Brandenburg Gate, etc.)

Provided they're both publicly owned and reasonably old, I can't see a reason not to. If for example, you copy the Statue of Liberty, Eiffel tower or something, I don't know who's going to sue you.

On the other hand, I would probably steer clear of Apple, Inc. latest HQ :)

Not the answer you're looking for? Browse other questions tagged legal licensing .

1
Can I put real monuments like white house, statue of liberty in my open world game?
9
Does it require any license to use a real city landscape in a car racing game?

20
Am I allowed to sell a XNA game by myself?
2
Are there any good ways to know if a resource is patented trademark or illegal to use?
6
Is it legal to add a cameo appearance of a known video game character in my game?
61
Why is account sharing so bad?
3
Why can we use planes and military vehicles, but not other things?
24
How can I create an exclusive asset for multiple clients who all want basically the same thing?