Why does handedness matter at all?

I'm really trying to understand this from a mathematical viewpoint. After all, numbers are numbers, the chirality or handedness depends on how one interprets it. 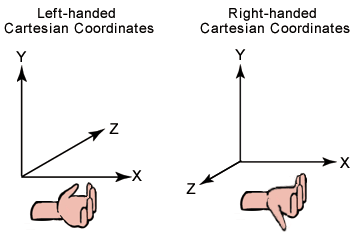 When we do a cross product of x and y we'd get z in both systems, again the numbers of the result are the same, it's just the interpretation of the observer.

Then why do I see questions about handedness all the time? Is there a place where a game developer needs to differentiate and work in converting between the two really? Eric Haines in a related article uses the term "right-handed data". What does this really mean, aren't they all numbers? Why would they force a coordinate system on the user? Also do APIs like GL or DX force a system at some point? I've read somewhere that, in OpenGL the camera is always at origin looking at -Z direction, while it's the opposite in DirectX.

It'd be great if someone can list out where this convention really makes a difference and why.

EDIT: I think can explain it more explicitly since many seem to misunderstand the question (sorry, I'm not a native speaker of this tongue). Why do people talk about converting an asset for handedness? Say a triangle with coords (0, 0, 0), (0, 1, 0) and (1, 0, 0) would mean the same in both systems mathematically, where is the handedness here?

I'm not sure about OpenGL but DirectX allows you to over write the default left-handedness therefore it wouldn't matter. As you've said, it's "nothing but" a convention, and at least DirectX allows you to work with both. Conventions do not matter by themselves, the only problem is that you need to be consistent with your choice. Mixing two such systems leads to either confusion (if you do make the conversions) or to all sorts of errors if you do not (but why would anyone do that, except for mistakes).

However it does matter in that you need to be consistent about what the numbers mean; it doesn't matter what decision was made initially, but once a decision is made you need to stick with it. For example, when you say:

When we do a cross product of x and y we'd get z in both systems, again the numbers of the result are the same, it's just the interpretation of the observer.

that's not exactly true. The magnitude of the resulting vector is the same, but they point in opposite directions.

Handedness — and choice of axes, in the same way — matter because the camera has to match to get the results you want.

Suppose that you had a dataset (scene) which included not only the objects to view, but also a definition of the camera, in terms of a position and (right, up, forward) basis vectors and a winding order for face culling. In that case, then obviously once you apply the camera transformation to the data you get the same screen-space points no matter how the data is arranged in world space.

The reason that we care about the axes/handedness/ordering of 3D data is because in games, the camera is not defined in the data but added by the game engine afterward, so we choose a camera design and say that all the data has to match that. (Also, multiple 3D models are combined in one scene, and they all have to match the camera, or be transformed to match.)

Not the answer you're looking for? Browse other questions tagged 3d vector coordinates or ask your own question.

3
How do I convert matrices intended for OpenGL to be compatible for DirectX?

6
Why / how does XNA's right-handed coordinate system effect anything if you can specify near/far Z values?
4
Converting from different handedness coordinate systems
5
Why not use vectors to represent orientation?
4
Does vector transformation order matter?
1
What does it actually mean by World, Window and Viewport?
2
Why does a unit vector show direction?
1
Why does the Debug.DrawRay return these weird lines
0
Why does XMVector4Dot return a vector with the dot product copied to it's components?
0
Handedness of 2D coordinate systems