How to implement collision detection of portals?

For example, take this scenario (excuse my horrible drawing skills): 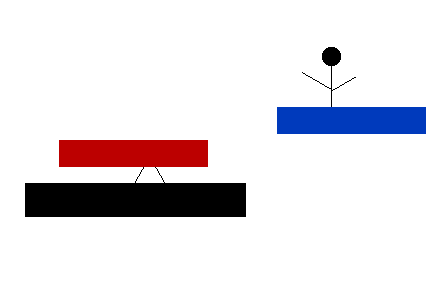 This is based on "Portal", where the stickman is going through the blue portal (which is linked to the red portal), but there is a wall stopping him on the red portal. Therefore he cannot go completely through the portal.

So my question is this: How do I do the physics/collision detection with them? Do I slice the player? Is there a way to link them? Are there any physics engines that support doing this? If not, how would I make one?

The Portal game has a nice way by which they solved this problem:

However, the copy of the player at the target location does not interact with the physics. It is only there for rendering purposes. Instead, they make virtual collision objects on the other side of the source portal, and make the player collide with that instead. This keeps the physics simple.

An image to illustrate: The blue portal is the source portal, the orange portal the target portal. The dashed white box is the virtual collision object, whereas the real box is the rendered object. The player (with the red dot) only interacts with the objects directly around it. The objects at the orange portal are completely ignored. 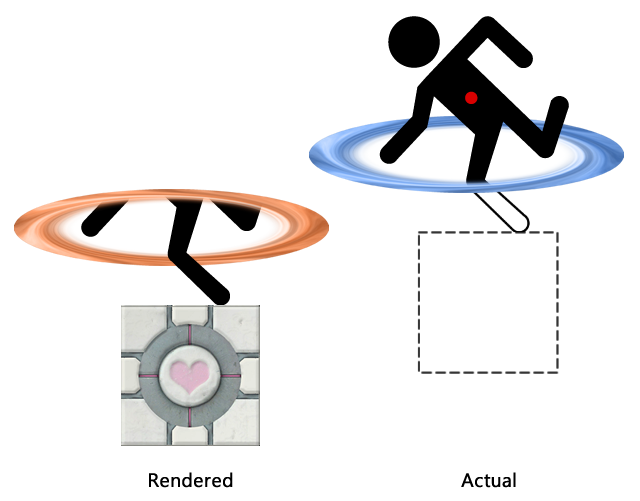 While you're inside a portal there would be two copies of the player in the physics engine. Each copy ignores all collisions that are on the opposite side of the portal, and you then combine the results and apply the simulation results to both models.

Ideally you'd apply gravity separately for each half of the player, but you might be able to get away with just applying it for the side of the portal the player's centre of mass is on.

To ignore those collisions you need to set up an appropriate volume, and test if a point is within it. A cylinder (possibly stretched vertically) would seem to be a good option. The test is then something like if (!collisionPoint.InsideCylinder(portal)) ProcessCollision(); else IgnoreCollision();

I believe most physics engines have a system for filtering what an object can collide with, so it should be possible using a standard physics engine. For example http://bulletphysics.org/mediawiki-1.5.8/index.php/Collision_Filtering#Custom_collision_filtering

To combine the results the simplest option would probably be to add some kind of inflexible constraint between the two, and let the physics engine handle it.

How would I calculate how far the player goes down?

Why would you want to? You don't need to calculate how far a player goes "down"; you'll find out how far down it goes as the object goes through the simulation.

How would I even connect the portals?

A portal, from a purely in-game perspective, is little more than an elaborate teleporter that messes with collision to turn collidable objects into non-collidable ones. When an object touches the portal, it starts potentially colliding with things on the other side. When the object passes "far enough" though the portal, you effectively teleport it to the other one, instantaneously changing its position and orientation.

9
Is there anything equivalent to Portal 2's linked_portal_door in any other engines?
7
Portal Projection
6
How to generate portal zones?