I am in the process of implementing atmospheric scattering of a planets from space. I have been using Sean O'Neil's shaders from http://http.developer.nvidia.com/GPUGems2/gpugems2_chapter16.html as a starting point.

I get strange artifacts with sky from space shader when not using fCameraAngle = 1 in the inner loop. What is the cause of these artifacts? The artifacts disappear when fCameraAngle is limtied to 1. I also seem to lack the hue that is present in O'Neil's sandbox (http://sponeil.net/downloads.htm)

I've found that the camera angle seems to handled very differently depending the source:

In the original shaders the camera angle in SkyFromSpaceShader is calculated as:

Whereas in ground from space shader the camera angle is calculated as:

However, various sources online tinker with negating the ray. Why is this?

Here is a C# Windows.Forms project that demonstrates the problem and that I've used to generate the images: https://github.com/ollipekka/AtmosphericScatteringTest/

Update: I have found out from the ScatterCPU project found on O'Neil's site that the camera ray is negated when the camera is above the point being shaded so that the scattering is calculated from point to the camera.

Changing the ray direction indeed does remove artifacts, but introduces other problems as illustrated here: 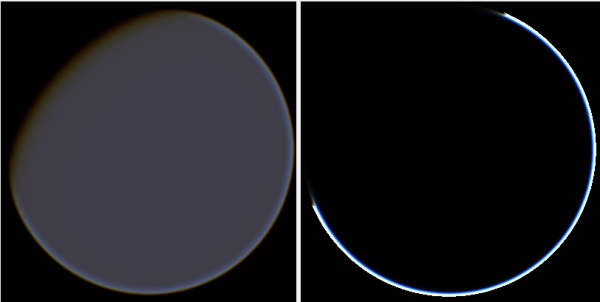 Furthermore, in the ScatterCPU project, O'Neil guards against situations where optical depth for light is less than zero:

As pointed out in the comments, along with these new artifacts this still leaves the question, what is wrong with the images where camera is positioned at 500, 500, 500? It feels like the halo is focused on completely wrong part of the planet. One would expect that the light would be closer to the spot where the sun should hits the planet, rather than where it changes from day to night.

The github project has been updated to reflect changes in this update.

I don't have working code right now, as I am transitioning my engine but these were my working parameter settings:

This was the shader:

Let me know if it still does work. If you need any other help I'll try to dig around my code. I think I used two spheres to do the rendering: one for the surface and one for the atmosphere.

some thought tracks : check the precision of your floats. at space scales, most all the times float32 is not enough. Check dpeth buffer if you have primitive rendering, like a sphere under your scattering shader.

These artifacts, can be found in raytracing as well, these are usually secondary rays intersection with the primary surface jittering from float precision issues.

EDIT: at 1000 (all integers are representible fully until 16 million in float32 representation, thanks to the 24 bits mantissa), the next number for a float32 is 1000.00006103 so your precision is still pretty good at this range.

look up flavien brebion (Ysaneya) and the game infinity quest for earth. He has interesting dev journal of gamedev and his forum where he explains how star system distances are impossible to manage using absolutes.

He also mentions the depth buffer problem at those kind of ranges, and is one of the first, if not the first, to introduce logarithmic z scales. http://www.gamedev.net/blog/73/entry-2006307-tip-of-the-day-logarithmic-zbuffer-artifacts-fix/ a much more complete here: http://outerra.blogspot.jp/2012/11/maximizing-depth-buffer-range-and.html

Software test bed: good idea, it is a excellent way of authoring shaders so you can debug what is going on step by step. just check your values lines by lines, and if something look weird you can investigate. I didn't see in the code you posted the part where the camera angle is used in the shader, so I'm a bit puzzled about this part though.