Hi guys I am starting a simple hobby app in Unity, its a 2D app, which have some alphabets like A,B,C..Z (images) . There ll be specific paths where user touch one by one to complete drawing the alphabet, like image below. Now I have some solutions for it in my mind:

I would like if some can have a better solution of it ? may be any optimized way, may be some variation of custom colliders, bounds, line renderes, curves etc. 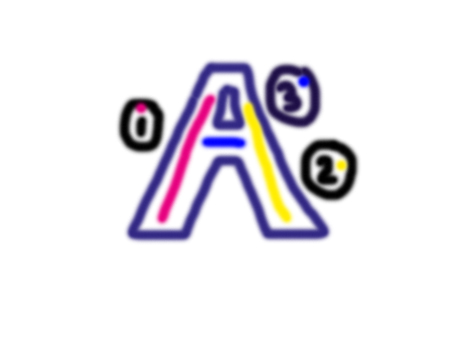 Why not create a path under the alphabet that you can use as the drawing guide?

I don't know much about meshes, colliders or 3D models, but in Cocoa Touch or Core Graphics you could create a UIBezierPath of CGPath which and lay it underneath the image (whether you want it visible or not) and you could track the user's touch and drag along the path.

This would also allow you to easily create segments, lines and curves along the path in the order you wish them to be enabled/highlighted/shown. You could further overlay a colour on the path as the user is dragging over it. You could also bundle the paths inside the application with the images if you want.

Creating models in 3dsmax as well as the colliders and meshes seem like a waste of energy, but that's just my $0.02.

Not the answer you're looking for? Browse other questions tagged 2d collision-detection architecture touch pixel .

41
Best Way to allow players to "Dye" images without losing color quality?
13
Combining Many Small Colliders into Larger Ones
4
Collider / coroutine timer issues
1
How to find the closest point on multiple colliders within a box?
1
Why is my spherecast returning an incorrect hit on mesh collider?
0
Unable to destroy collider Unity3d
0
Why aren't the Physics2D.Raycasts reliably colliding with the 2D Box Collider walls?