How to Change default Mouse pointer on emulator in Android?

As JanithaR mentioned, there's no "default mouse cursor" in Android. Newer versions of the Android operating system support a developer mode that shows touch events with a screen image and various apps exist that create a mouse effect for touch events.

For your own application, if you want to have something like a mouse, you should think of it as a sprite that gets re-positioned based on touch events. You'll have to decide if you want the "pointer" visible on the screen when the screen isn't being touched (i.e., whether to leave it in the last touched location or whether to remove it). You'll also have to decide whether you want multiple pointers appearing for multitouch.

Do render a sprite, you should take a look at the SpriteExample from the examples library. Basically you'll be doing something along these lines:

You're going to want some kind of pointer image in your gfx directory. Something like these: 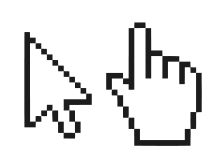 And you're going to want to override the onTouch() method of the sprite, so it gets relocated as you touch:

Alternative Approach to Controlling the Pointer

As an alternative, you might consider using an analog or digital on screen control (from the libraries in AndEngine) to "steer" the pointer around the screen. One of these:

Take a look at the examples library to see how to build them in and use them. If you do this you'll have to do some work to "bind" the sprite to the screen area. (Here's a discussion on that.)

What to Do for AndEngine GLES1

As you noted in the comments, the above sample code was for GLES2. I think you'll find yourself in increasingly a land of no support if you're determined to use the older version GLES1, so the real advice I'd give is to upgrade to GLES2. (It's free, after all.)

BUT, if you really don't want to upgrade, you can still accomplish everything I've described. The key is to break it down into steps. You'll just need to:

A Sidenote About User Experience

I know your question isn't directly getting at this, but I suspect the User Experience community would have aneurysms at the idea of implementing a mouse in this manner in Android. From a usability standpoint, it really is contrary to the "touch" experience people expect with Android and iOS. (Reminds me a bit of some early console ports of PC games.) That doesn't mean there isn't an appropriate time and place to do it, but I think it's worth giving thought to whether you really want to fake a "mouse" or if there might be an alternative, more android-friendly, approach to your problem.

Not the answer you're looking for? Browse other questions tagged android andengine user-experience or ask your own question.

13
How different is Java for JRE vs Java for Android?
5
How do I place a progress bar in AndEngine?
2
Ground for 2D AndEngine game with physics
3
How to rotate a sprite using multi-touch with AndEngine?
4
How can I change width of sprite Dynamically?
2
AndEngine: edit elasticity on action
3
Android LibGDX game: Choosing starting activity