With a texture atlas of this size, what requirements should I say, on ANDROID ?

This image (source : https://stackoverflow.com/questions/10392027/recommended-limit-for-memory-management-in-cocos2d ) shows the requirements for IPHONE, what about for ANDROID : 512Mo minimum, with a 1GHz, is a correct requirement ? 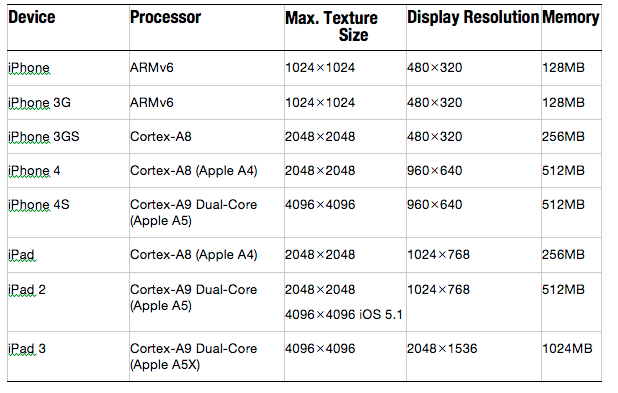 Thanks for your answer

android textures texture-atlas
Share
Improve this question
edited May 23 '17 at 12:37

You'll be okay to ship your game to majority of your users with a configuration like that. Even the fairly old (nearly 3 years now) old Samsung Galaxy Captivate will run with a texture resolution of that size. You won't have too many issues supporting almost any device like that (I can't think of any off the top of my head. Okay, that's a lie... maybe the HTC Drean. However, that being said if you want to prevent random crashes and the like when a user OPENS your app - do yourself a favour and query for GL_MAX_TEXTURE_SIZE. This will return the maximum texture dimension you can use and if it's less than 2048 you can throw a warning to your user stating gameplay probably won't work or you can load some alternative assets if that's possible for your game that might work for the game at a lower resolution, scale, or with some effects missing. The choice is yours!

Edit: We're in 2015 now; nearing 2016. You can safely assume most devices will support such an atlas.

Not the answer you're looking for? Browse other questions tagged android textures texture-atlas .

3
Do I have to keep textures in Android games smaller than 1024^2?
1
Are lightmaps also considered textures?

2
How to implement custom texture formats in Android?
2
Texture compression strategy for Android OpenGL ES that caters for alphas
3
Total Texture memory size iOS / OpenGL ES
0
How do I load 100+, 480*800, 30KB PNGs into a frame by frame animation on Android without OOMs?
3
Libgdx game crashes on some devices without any Errors / Logs
1
GPU (render time) increase if screen size increase
0
How best to detect device performance capabilities and set quality setting accordingly when using Unity