I am developing a game/simulation where agents are fighting for land. I have the situation shown in the picture below: 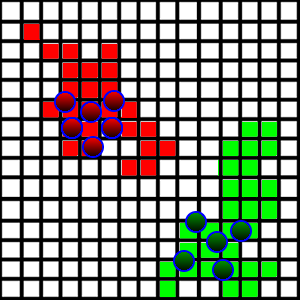 These creatures are walking around and occupying pieces of land they step on if they are free. To make this more interesting, I want to introduce "patrolling" behaviour, such that agents are actually walking around their land to patrol from any intruders who may want to take it.

On the technical side, each square is represented as a x,y position as well as a dimension representing its side length. It also contains information on who occupies the square. All squares are stored in an ArrayList.

How can I introduce patrolling behaviour? What I want is for each agent to patrol a certain portion of the area (they divide amongst themselves which areas they will patrol). The main issue I've found are as follows:

I had an idea of taking the furthermost square in each direction, treating those as the boundaries of the area, and divide regions based on those boundaries, but this might include lots of irrelevant land.

How should I approach this problem?

Fascinating question. I think one of the first issues you have to address is whether you want the patrolling behavior to be "optimum" patrolling or "lifelike" patrolling. I'm just making up these words, but what I mean is:

Optimum: The agents move about in a manner that perfectly distributes their coverage area for the system as a whole.

Lifelike: The agents move about and attempt to distribute themselves as equally as possible, but each only have access to data local to their perspective.

I'm going to focus on the second approach, which I think you can solve using weighted blending of various steering patterns from Craig Reynolds' Steering Behaviors For Autonomous Characters. The basic idea of steering behaviors is to use simple forces that combine to produce improvisational navigation around an environment. In your case I think you'd want to combine the following steering behaviors:

I think you'd want to play around with the relative weighting dynamically. For example, if an agent detects an invader, the separation weighting should drop down. (In other words, they only need to spread out when they're hunting, not when they find someone.) I think if you played around with the weights for the above four patterns, you'd have something pretty close to what you're looking for.

There are quite a few resources online about how to implement "boids" that follow the behavior patterns described. I recommend the open-source implementation opensteer.

One aproach is to record, for each cell, when it was last visited by a "guard", and have the guards continually move to whichever neighboring cell that has been unvisited the longest.

Of course, this assumes that the territory is connected.

This is not a perfect solution, but easy to code, adaptive to changing circumstances, and efficient. I have successfully used this algorithm for scouting and harassment attacks in an rts ai I wrote a while back.

Not the answer you're looking for? Browse other questions tagged java ai grid .