in the shadow of a sphere [duplicate]

(Related, but somewhat different, to my previous question)

How can I determine in a fragment shader if a fragment is in the shadow of a sphere?

In perspective, the horizon of the sphere is in front of the centre-point. Imagine holding a football at arms-length and stare at a point on the horizon of it; now move the football closer to you eye; what happens? It is no longer visible; the closer the sphere is to the eye, the less of the surface you can see: 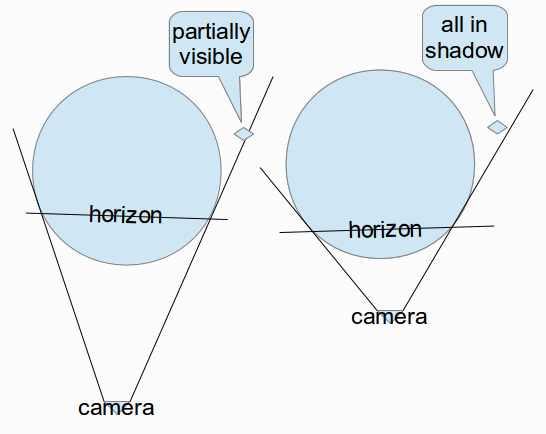 How do you compute the plane of the horizon, the cone, and how do you test for it in the fragment shader?

With these two values, you determine if a fragment is 'in the shadow' of the sphere.

But how do you compute this? What, even, is the coordinate of the camera (0,0,-1 if orthogonal projection, else 0,0,0?)? And how far away is the horizon of the sphere?

And what's the code for nearest point on ray to point? What I've come up with is [src]:

Then the vertex shader just has to pass the fragment position along:

And the fragment shader sees if its inside-the-cone using distance to sphere centre:

This might be along the right track, but its not working (it looks hopeful drawn in ortho; in perspective it often draws things in the wrong colour). And how to compute the horizon?

The generalized solution would be to (in world space) draw a line between the fragment's location and the camera. If said line passes through or intersects the sphere your fragment falls behind the sphere and will not be visible.

Here is a breakdown of the math you would use for checking the intersection.

It suddenly occurs to me that there's a really easy solution to all this, which requires no shader logic at all. Just use the depth buffer.

Draw a (filled in) circle at the proper location and distance from the camera, pointed straight at the camera. Just use the glColorMask to turn off depth writes when you do draw the circle.

Once the depth is laid down, any fragments you draw later that are behind it will be culled by the depth buffer.

I'll assume you know how to draw a filled-in circle of a given radius, location, and facing. So instead, I'll cover how to compute where it goes.

We compute the distance from P to place our circle. This is done with this equation:

We then use the distance to compute the the actual location, by getting the direction from P towards C and multiplying it by the distance.

Note that dir is the direction towards the camera which the circle plane must face.

Oh, and don't forget to turn the color mask back off after you draw the sphere.

To answer my own question:

The sphere's centre has to be converted to view space and passed in as a uniform; this means multiplying it by the modelview matrix.

The vertex shader passes on the fragment's coordinate in view-space:

The fragment shader does the check:

This computes where on the fragment's ray the nearest point is, as a ratio t.

It also computes the distance (squared - dot(d,d)) between the nearest point and the sphere's centre.

If the nearest point is beyond the sphere or the intersection of the line is less than 1 (meaning it is in front of the sphere) then it is in the foreground.

Not the answer you're looking for? Browse other questions tagged opengl graphics glsl geometry or ask your own question.

3
culling lines on the back of a globe

9
First time shadow mapping problems
4
Problems implementing a screen space shadow ray tracing shader
1
Light following me around the room. Something is wrong with my shader!
12
How can I find the largest sphere that fits inside a frustum?
1
Dot based light mask with shader on sprites
10
How is Signed Distance Field Ray Marching implemented for a dynamic world?
2
How to rotate directional billboard particle sprites toward the direction the particle is moving
1
C++ Mouse picking for ray to plane intersection