Ask Question
Asked 11 years, 10 months ago
Modified 6 years ago
Viewed 105k times
91
\$\begingroup\$
Want to improve this post? Provide detailed answers to this question, including citations and an explanation of why your answer is correct. Answers without enough detail may be edited or deleted.
As it currently stands, this question is not a good fit for our Q&A format. We expect answers to be supported by facts, references, or expertise, but this question will likely solicit debate, arguments, polling, or extended discussion. If you feel that this question can be improved and possibly reopened, visit the help center for guidance.
Closed 10 years ago.

I have some experience in creating, however I like to have some well written reference material to help me produce better products. Are there any game design books that are not aimed at a particular programming language?

Here's Top 3 books on game design that I'd recommend:

Now, probably the most important thing is that game design as a discipline is pretty thin, but it draws a lot from other areas like art, history, economics, math (specifically theory of probabilities & statistics), psychology, writing and even music & filmmaking. So good books in all those disciplines probably would be equally important for a game designer as well as specific game design books.

I pretty much have Theory of Fun by my side all the time.

I'm sorry if this would sound like a shameless plug, but I developed a visualization service that crawls Amazon data and shows relationships between books. I specifically created visualization for your question and it had all books from Alex Koloskov's answer. I wanted to share those that I couldn't find among answers here but presented in my visualization.

Reality is Broken written by game designer Jane McGonigal it reveals how we can harness the power of games to solve real-world problems and boost global happiness.

The Ultimate History of Video Games Steven L. Kent writes about about games that changed the world, the visionaries who made them, and the fanatics who played them.

The Ultimate Guide to Video Game Writing and Design This one comes from the co-authors of The Chronicles of Riddick game. I haven't read it, but overall reviews are positive.

Among all I really enjoyed reading "The Art of Game Design: A book of lenses" suggested by Alex. 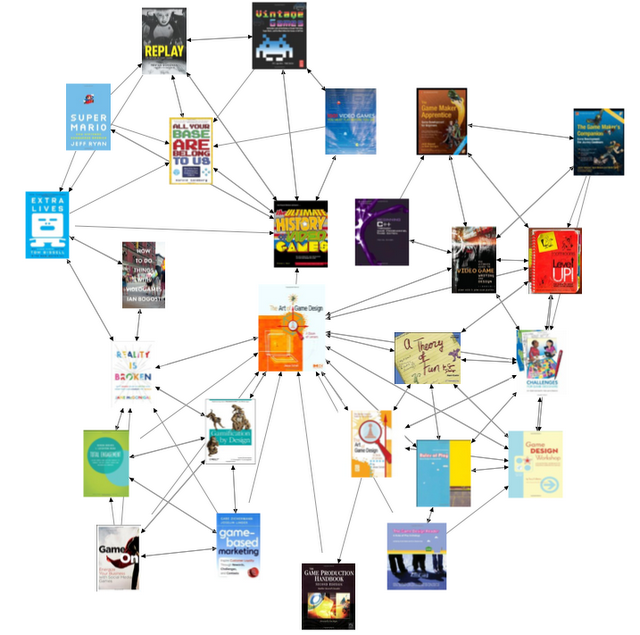 Not specific to game design, but The Design of Everyday Things is a good book to get you thinking about user interactions in general.

I can't believe nobody mentioned Game Programming Gems yet. I always considered it to be the standard when it comes to game design.

I was very fond of Andrew Rollings and Ernest Adams on Game Design. It goes into depths of interactive game mechanics as related to player, which is the only unique element to game development as editing is to movies.

Having said that I'd consider suggesting screenplay writing material as it shows you what connects with people and what doesn't. I'm not talking about linear progress material here like stories, but what kind of characters connect with people, themes, motifs etc. In that area I suggest these:

Game Coding Complete is the best game design book I have. Although it does use C++ for it's examples there are not many. It talks much more about the how to go about doing things, which can be applied to any language. It's also great value (800+ pages I think).

Gamefeel by Steve Swink completely changed they way I think about developing games.

Game design and development are different (often confused) topics. Game design concerns the design of gameplay and game mechanics (rules of the game, so to speak) rather than the actual coding, audio and graphic design involved in implementing the game. I believe this question is about Game design.

I've also checked out a number of other game design books that didn't do much for me, such as "Fundamentals of Game Design." Many repeat the same few truisms and have a very low signal/noise ratio.

If you want to design a good game you may want to look at resources that have nothing to do with programming, but focus on the ideas behind your game idea.

Such as war gaming, a classic book on War Games is "The Complete Wargames Handbook". The only version I have read is the 1st edition, but it has had 3 edition total. Any edition will be useful and I have enjoyed the book.

The Author, James F Dunnigan, is a long-time war game designer, actually almost a legend in the number of War games he has designed. He writes outside of games on the theory of War also. So if you game is a War game you would get a lot traction by getting at least one of James' books.

The later editions of this book do deal with how Computers can and are used with this type of game.

Rules of Play, Roger Caillois' "Man, Play & Games" and Huizinga's "Homo Ludens" - and of course Koster's "Theory of Fun" as an ANTI-guide (look at the farce that was SWG to understand why.

Don't think I saw this one mentioned, but I couldn't live without "Game Engine Architecture" by Jason Gregory.

Real-time Rendering 3rd ed. is a really good book for game rendering, it introduces all the aspects of Computer Graphics and it has abundant resources which lead you to specific field.

All of the best books have already been posted, but there’s one book that I feel is invaluable to a game designer. Your own journal. When you play games, keep a journal nearby and jot down notes. What about the game design did you like? Didn’t like? Did anything really stand out and if so why? Did you disagree with a particular design choice?

You basically just want to write down everything and anything that comes to mind about the design of the game as you play. Having a journal like this will be invaluable to you when you design your own games.

I've really enjoyed reading Level Up - The Guide to Great Video Game Design It's pretty comprehensive about the entire spectrum of game design.

Written by the game designer behind the Maximo series of games it's illustrated in an approachable style. Well worth a read.

Not the answer you're looking for? Browse other questions tagged game-design books .

158
Must read game development books
71
How do you come up with ideas for new games?
2
How to begin serious game development (in C++)
4
How to understand huge code bases?
-1
A methodology for creating simple sprite games (without programming technology)

1
Can a scrub design/develop a strong competitive fighter?
5
MMORPG game balancing
22
Game planning and software design? I feel that UML is not convenient