I have been making a Texas Hold'Em game as a part of an assessment, and I have been mulling over how to examine the 7 available cards and determine if hands exist.

The only possible method I can think of is to sort the cards numerically, then examine each possible group of 5 cards and check if they match a list of every single possible hand. That would take a long time snd would only be feasible for determining pairs, as the suit is irrelevant.

The cards are each strings, made up of a number/a/j/q/k, and a suit (char)3 (that makes a little spades symbol).

Does anyone have any suggestions, formulas, or links I could use to help create a hand-analysing system?

Don't worry about ranking hands against each other yet, that's a different kettle of fish.

I think you can find the majority of poker hands by simply making a couple of tables of how many cards in the hand there are of each rank and suit.

In other words, create an array mapping card ranks (numbers and A/J/Q/K) to the count of cards of that rank in your hand. If the player has a pair or three-of-a-kind, there will be an element in this array equal to 2 or 3, etc. They have a full house if there's one element that's 2 and another that's 3, and a straight if there are five consecutive elements equal to 1 in this array.

Likewise you can make a similar array of the count of cards of each suit, and use it to detect flushes.

Once you've detected the presence of a specific hand it's pretty easy to then go back and find the specific cards in the hand, for highlighting them in the UI or whatever you need to do.

It's a little tricky because there's so many combinations. Luckily you have a processor that can check a great number of combinations in a very short time.

For 1, 5 you can use the same list and look for sequences where all cards have one or more entries in the list for a sequence of 5 cards. If they also have the same suit, it's a straight flush.

4 can have the same list setup but this time you're counting the suit. Look for numbers of 5 or higher.

Finally, 9, you have the highest card, which should be a simple matter of looking at the last highest value from one of your lists above.

You can break out once you've found a match if you search in order. Though it would be trivial to continue the search and find all the matches if you want to provide all that information to the user.

Essentially, you're filling buckets. Then checking the buckets for combinations. To illustrate: 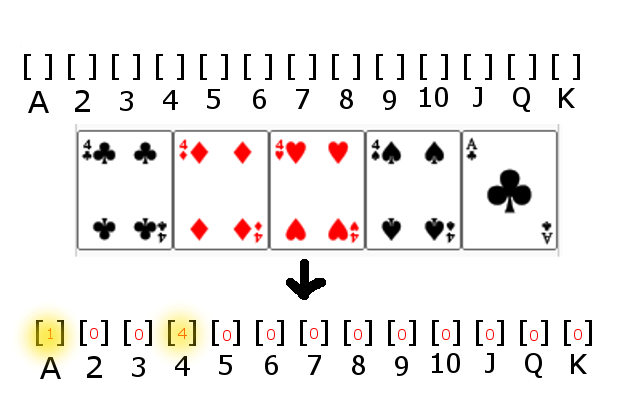 Starting with an array, with a bucket for each card, iterate through the cards and count the instance of each card. Then you can easily iterate the array and check for certain combinations. In this example, it's clear that there's a 4 of a kind because one of the buckets has 4 items in it.

I bumped into this algorithm once. It multiplies prime numbers to determine hands and is a very interesting reading. Cactus Kev's Poker Hand Evaluator

To supplement the excellent answers this question has already gotten, I thought it would be helpful to offer one of the most straightforward ways of comparing hands once the basic classification technique in place. First of all, you'll want to tag hands with their class, as numerous answers have suggested - most of your comparisons of 'is hand X better than hand Y?' can then be done just by comparing the two hands' classes and seeing which class is better. For the rest, you'll actually need to compare on a card-by-card basis, and it turns out that a little bit more work in classification will make this easier.

As the baseline case, consider the situation where both hands are 'high card' hands; in this case, you'd compare the two highest cards first, then (if they matched) the next two cards, etc. If you assume that each input hand is sorted from highest to lowest card, this approach leads to code that looks like this:

Now, the good news: it turns out that this lexicographical ordering, suitably tweaked, works for comparing two hands in any of the classes, as long as their class is the same. For instance, since the way of comparing pairs is to compare the pairs first, then the other three cards, you can sort your hand to put the pair first (or even one card of the pair first!) and run this same comparison. (So, for instance, a hand like A9772 would be stored as either 77A92 or, better yet, 7A927; the hand A9972 would be stored as 9A729, and comparing with the above code you'd start by pitting 7 against 9 and find that A9972 won). A hand of two pair would be stored with the higher of the two pairs first, then the lower, then the 'kicker' (so, e.g., A9977 would store as 97A97); three of a kind would be stored with one card of the three first, then the kickers, then the other cards (e.g., A7772 would be 7A277); a full house would be stored with one of its three and then one of its two (e.g., 99777 would be stored as 79779); and straights and flushes can both be stored in 'direct lexicographical' order since they're both compared just like high-card hands are. This leads to a straightforward outer comparator function that works for all classes of hands with the already-given function:

Hopefully this will be of some help!

There are some parallelisations possible using suitable card representations and bit-twiddling. For example, this Java code evaluates 7-card hards returning an integer which can be used for comparing two hands. It could be adapted to report the type of the hand in a more user-friendly way. The core ideas come from Cactus Kev's page referenced in an earlier answer.

If you're only interested in possible implementations for naming the hand in various languages rather than efficiency and code clarity, you could also look at the Name the poker hand challenge on codegolf.SE.

First, you need to know the rank and suit of all the cards; trivial but necessary.

Then, spin through these 7 cards and create two histograms; one by rank (using an array with 13 indexes, all initialized to zero and incremented by 1 if and when a card in the hand with that rank is found) and one by suit (using an array of four elements constructed similarly as for rank). These are linear operations and you can do both operations for each card for only one set of traversals.

You can then determine whether any of the following hands exist by simply examining each histogram for buckets matching the criteria, and/or a simple follow-up test:

You can, quite naturally, combine several of these checks:

Basically, if the answers to these yield any hand, set the resulting "hand strength" value to the strength of the hand found, if the value is not already higher. For instance, if you have a full house, strength 7 of 9, then you also have a three of a kind, strength 4, and a pair, strength 2.

There are a few shortcuts and fast outs, but overall it's not really that expensive to just run all the checks.

You can do poker hands relatively easily with a simple iterative approach.

For each card, check if there is one or two or three others with the same face to check for pair or three/four of a kind.

Full houses are similar. Or if you find both a pair and three of a kind that aren't the same face, flag a full house as found.

For flushs, check each suit to see if there are five of the same suit.

Checking straight is easy, even if unsorted. For each card, check if there is one higher, and repeat until five consecutive cards are found or not.

Royal flushes and straight flushes can be found similarly to straights. Royal flushes have some extra conditions in that lower valued cards can be ignored.

Yes, this approach is inefficient, but for most poker games, that is irrelevant. You're checking a tiny handful of players every half minute or so, not checking thousands of hands per second.

Better methods exist but may take more time to code, and you likely have more important things to spend time/money on that'll make for a better game from players' perspective besides cleverness and efficiency of an algorithm.

compare each card with each other in a nested loop like this one:

matches will hold the following:
2 for a pair
4 for two pairs
6 for toak
8 for a fullhouse
12 for a poker

Not the answer you're looking for? Browse other questions tagged c++ card-game poker or ask your own question.

8
Determining player.isFalling() through change of y?
3
Determining a point that reached another point
3
Box2D Issues determining the side of collision
0
Determining if a point is perpendicular to a line
0
How to sort poker hands? c++
2
Poker AI's designed for casual play
1
Render hands and gun in front of everything