What's the best way of transforming a 2D vector into the closest 8-way compass direction?

If you have a 2D vector expressed as x and y, what's a good way of transforming that into the closest compass direction?

The simplest way is probably to get the angle of the vector using atan2(), as Tetrad suggests in the comments, and then scale and round it, e.g. (pseudocode):

The octant = round( 8 * angle / (2*PI) + 8 ) % 8 line might need some explanation. In pretty much all languages that I know of that have it, the atan2() function returns the angle in radians. Dividing it by 2π converts it from radians to fractions of a full circle, and multiplying by 8 then converts it to eighths of a circle, which we then round to the nearest integer. Finally, we reduce it modulo 8 to take care of the wrap-around, so that both 0 and 8 are correctly mapped to east.

The reason for the + 8, which I skipped past above, is that in some languages atan2() may return negative results (i.e. from −π to +π rather than from 0 to 2π) and the modulo operator (%) may be defined to return negative values for negative arguments (or its behavior for negative arguments may be undefined). Adding 8 (i.e. one full turn) to the input before reduction ensures that the arguments are always positive, without affecting the result in any other way.

If your language doesn't happen to provide a convenient round-to-nearest function, you can use a truncating integer conversion instead and just add 0.5 to the argument, like this:

Note that, in some languages, the default float-to-integer conversion rounds negative inputs up towards zero rather than down, which is another reason to make sure that the input is always positive.

Of course, you can replace all occurrences of 8 on that line with some other number (e.g. 4 or 16, or even 6 or 12 if you're on a hex map) to divide the circle into that many directions. Just adjust the enum/array accordingly.

You have 8 options (or 16 or more if you want even finer precision). 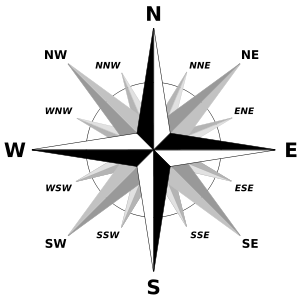 Use atan2(y,x) to get the angle for your vector.

atan2() works in the following way: 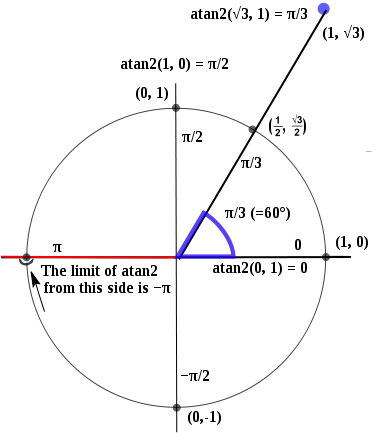 Now we just need to map the output of atan2() to match that of the compass we have above.

Likely the simplest to implement is a incrementing check of angles. Here's some pseudo code that easily be modified for increased precision:

Now to add more precision, simply add the values to the direction enum.

The algorithm works by checking increasing values around the compass to see if our angle lays somewhere between where we last checked and the new position. That's why we start at -PI + increment/2. We want to offset our checks to include equal space around each direction. Something like this: 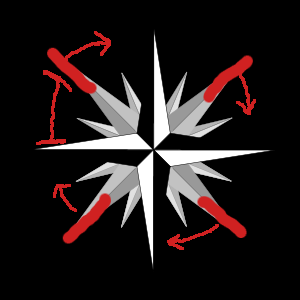 West is broken in two because of the return values of atan2() at West are discontinuous.

Whenever you're dealing with vectors, consider fundamental vector operations instead of converting to angles in some particular frame.

Given a query vector v and a set of unit vectors s, the most-aligned vector is the vector s_i that maximizes dot(v,s_i). This is due to that the dot product given fixed lengths for the parameters has a maximum for vectors with the same direction and a minimum for vectors with opposing directions, changing smoothly inbetween.

This generalizes trivially into more dimensions than two, is extensible with arbitrary directions and doesn't suffer frame-specific problems like infinite gradients.

Implementation-wise, this would boil down to associating from a vector in each cardinal direction with an identifier (enum, string, whatever you need) representing that direction. You would then loop over your set of directions, finding the one with the highest dot product.

One way that hasn't been mentioned here is treating the vectors as complex numbers. They don't require trigonometry and can be pretty intuitive for adding, multiplying or rounding rotations, especially since you're already have your headings represented as pairs of numbers.

In case you're not familiar with them, the directions are expressed in the form of a + b(i) with a being the real component and b(i) is the imaginary. If you imagine the cartesian plane with the X being real and Y being imaginary, 1 would be east (right), i would be north.

Here is the key part: The 8 cardinal directions are represented exclusively with the numbers 1, -1 or 0 for their real and imaginary components. So all you have to do is reduce your X, Y coordinates as a ratio and round both to the closest whole number to get the direction.

For heading-to-nearest diagonal conversion, reduce both X and Y proportionally so the larger value is exactly 1 or -1. Set

The above doesn't actually require the use of a complex number structure, but thinking of them as such makes it quicker to find the 8 cardinal directions. You can do vector math the usual way if you want to get the net heading of two or more vectors. (As complex numbers, you don't add, but multiply for the result)

Wonder, why so complicated? (not sure what language, so keep it general)

If you want the 8 direction from a Vector2, just normalize it and then round it. Maybe something like:

Then you could still convert to String, like Philipp explained:

0.1 is just in case if floating point precision issues, except you rounded to int, then you are safe with 0. Or do I miss something?

this seems to work:

When you want a string:

This gives you constants by utilizing bitfields:

A slight performance improvement would be to put the <-checks into the else-branch of the corresponding >-checks, but I refrained from doing that because it harms readability.

Not the answer you're looking for? Browse other questions tagged algorithm sprites vector .

0
Divide screen in eight sectors
-2
2D Vector Compass Direction
0
How to determine the best approximate direction
5
From 3d rotation, snap to nearest 90 directions
4
Is there a quick way to determine if a vector is in a quadrant?
4
Choosing the correct isometric character facing direction
2
Finding vectors with two points
1
Designing a four-directional movement control
0
Get rotate angle using a formula
0
Position of an object relative to another in a 2D plane
See more linked questions

3
Finding closest object to a location within a specific perpendicular distance to direction vector
0
Can GJK be used with the same "direction finding method" every time?
8
What's the 'proper' way to get unit vectors?
2
Given a point on a 2D grid of discrete points, and a normalized direction vector, how to I find the next point in that direction?
2
Most efficient way to get the closest point to a 3d rectangle
0
Issue picking the closest vector in a unique circumstance
0
Is speed and direction generally combined into one vector, or separated into two?