Converting a 2D curve into points for data storage

I’ve created an algorithm which converts any curve i.e. path into minimum number of points so that I can save it into a file or database.

For those who know Android Path Class - Note that the dstPath is a custom class, which records the points into an Array so I can save the points later, while the srcPath is the result of a Regions union and therefore has no key points for me to save.

The problem is that the circle does not look smooth as you can see in this image, produced by the code below, where the source path consists of a perfect circle and rectangle. I tried to change angle of tolerance and the steps length, but nothing helps. I wonder if you can suggest any improvement to this algorithm, or a different approach.

EDIT: I have now posted the entire code for those who use Android java, so they can easily try and experiment. 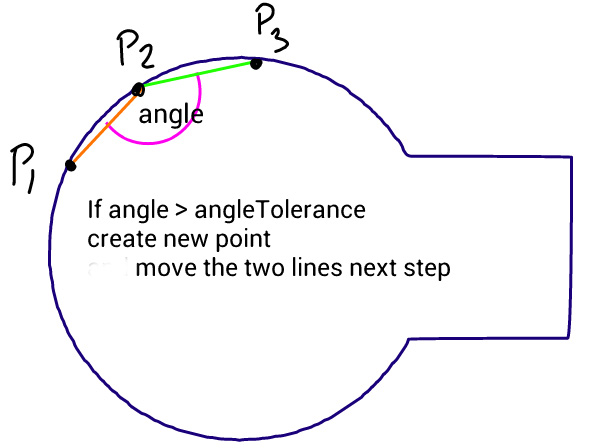 Here's a comparison between the original and what my algorithm produces: 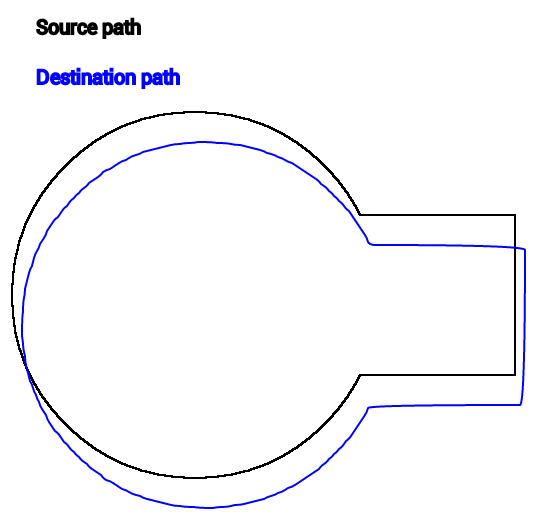 I think you have two problems:

Initially you start with equal distances between p0 to p1 and p1 to p2. If the tolerance angle between the line segments is not met, you move p1 and p2 forward, but keep p0 where it was. This increases the distance between p0 to p1 while keeping the distance between p1 to p2 the same. When you create a curve using p1 as the control points, it can be heavily biased towards p2 depending on how many iterations have passed since the last curve. If you would move p2 twice the amount than p1, you would get even distances between the points.

As mentioned in other answers as well, quadratic curve is not very good for this case. Adjacent curves you create should share a control point and a tangent. When your input data is just points, Catmull-Rom Spline is a good choice for that purpose. It's a cubic Hermite curve, where the tangents for the control points are calculated from previous and next points.

The Path API in Android supports Bézier curves, which are a little different than Hermite curves regarding parameters. Fortunately Hermite curves can be converted to Bézier curves. Here is the first example code I found when Googling. This Stackoverflow answer also seems to give the formula.

You also mentioned the problem of sharp edges. With the input data you have, it's impossible to detect if there is an actual sharp corner or just a very steep curve. If this becomes a problem, you can make the iteration more adaptive by increasing / decreasing the step on-the-fly as needed.

If p0_1 is in the intersection of the tangents in p0 and p1, the result should be smooth. Even better, since PathMeasure.getPosTan() returns also tangent as the third parameter, you can use actual accurate tangents instead of approximations from adjacent points. With this approach you need less changes to your existing solution.

Based on this answer, the intersection point can be calculated with the following formula:

This solution however works only if both u and v are non-negative. See the second picture: 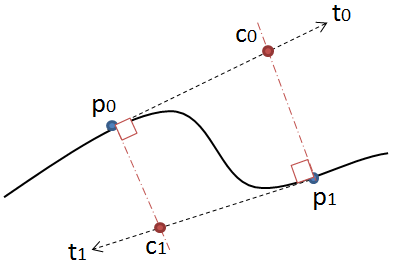 Here the rays don't intersect although the lines would, since u is negative. In this case it's not possible to draw a quadratic curve that would smoothly connect to the previous one. Here you need the bézier curves. You can calculate the control points for it either with the method given earlier in this answer or derive them directly from the tangents. Projecting p0 to the tangent ray p0+u*t0 and vise versa for the other ray gives both of the control points c0 and c1. You can also adjust the curve by using any point between p0 and c0 instead of c0 as long as it lies on the tangent ray.

Edit2: If your drawing position is in p1, you can calculate the bezier control points to p2 with the following pseudo code:

With these you can append a path from p1 to p2:

When you are saving the path, you just save all points p0 ... pN. No need to save the control points cp1 and cp2, as they can be calculated as needed.

Edit3: As it seems to be hard to get good input values for the curve generation, I propose another approach: Use serialization. Android Path doesn't seem to support it, but fortunately Region class does. See this answer for the code. This should give you the exact result. It might take some space in the serialized form if it's not optimized, but in that case it should compress very well. Compression is easy in Android Java using GZIPOutputStream.

What would the W3C do?

The internet has had this problem. The World Wide Web Consortium noticed. It has a recommended standard solution since 1999: Scalable Vector Graphics (SVG). It's an XML-based file format specifically designed for storing 2D shapes.

Here's the technical specification for SVG version 1.1.
(Don't be scared by the name; It's actually pleasant to read.)

They've written down exactly how basic shapes like circles or rectangles are to be stored. For example, rectangles have these properties: x, y, width, height, rx, ry. (The rx and ry can be used for rounded corners.)

Here's their example rectangle in SVG: (Well, two really -- one for the canvas outline.)

Here's what it represents:

As the specification says, you're free to leave out some of the properties if you don't need them. (For example, rx and ry attributes weren't used here.) Yes, there's a ton of cruft at the top about DOCTYPE which you won't need just for your game. They're are optional too.

SVG paths are "paths" in the sense that if you put a pencil to a paper, move it around and eventually raise it again, you have a path. They don't have to be closed, but they might be.

Each path has a d attribute (I like to think it stands for "draw"), containing path data, a sequence of commands for basically just putting a pen to a paper and moving it around.

They give the example of a triangle:

See the d attribute in the path?

Straight lines are boring? Use the cubic or quadratic Bézier commands! 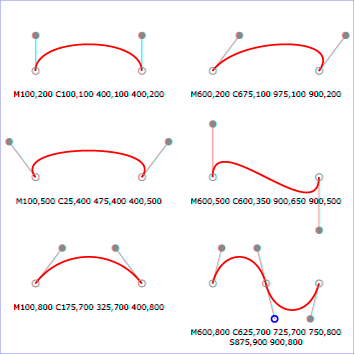 The theory behind Bézier curves is covered well elsewhere (such as on Wikipedia), but here's the executive summary: Béziers have a start and end point, with possibly many control points that influence where the curve in between is going.

The specification also gives instructions for converting most basic shapes into paths in case you want to.

Why and when to use SVG

Decide carefully if you want to go down this path (pun intended), because it's really quite complicated to represent any arbitrary 2D shape in text! You can make your life so much easier if you e.g. limit yourself to just paths made of (potentially really many) straight lines.

But if you do decide you want arbitrary shapes, SVG is the way to go: It has great tool support: You can find many libraries for XML parsing at the low level and SVG editor tools at the high level.

Regardless, the SVG standard sets a good example.

Another suggestion is instead of sampling the points, use the mean of the points you're skipping over.

Another suggestion is instead of using an angle as a threshold, use the difference between the actual curve and the approximate curve. Angles aren't the real problem; the real problem is when the set of points doesn't fit a bezier curve.

Another suggestion is to use cubic beziers, with the tangent of one matching the tangent of the next. Otherwise (with quadratics) I think your curves won't match up smoothly.

I don't know if it's a good solution, but it worked well for me. It's also fast. In my example, I intersect a rounded path with a pattern I created (stripes). It looks good even when scaled. 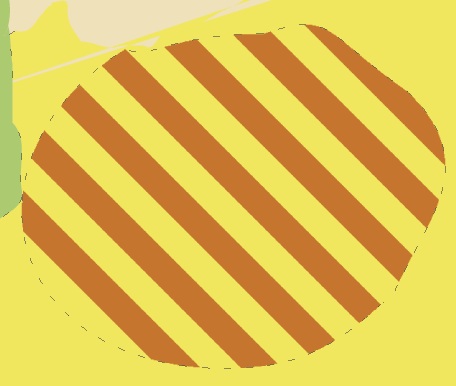 Basically, you take n equispaced nodes (optimal interpolation is not equispaced, but for your case it should be good enough and easy to implement)

You end up with a polygon of order n which decreases the error between your curve if (<-- big if) your line is smooth enough.

In your case, you're doing linear (order 1) interpolation.

The other case (as GriffinHeart recommended) was to use Splines (http://en.wikipedia.org/wiki/Spline_interpolation)

Either case would give you some form of polynomial fit for your curve.

If the point of the conversion is for storage only, and when you render it back on the screen you need it to be smooth, then the highest fidelity storage you can get, while still minimizing the total storage required to persist a given curve might be to actually store the attributes of the circle (or an arc, rather) and re-draw it on demand.

If you need to convert the circle/arc into points anyway for rendering, then you can possibly to that upon loading it from storage, while always storing just the attributes.

Is there a reason for going for curves as opposed to straight lines? Straight lines are simpler to work with, and can be rendered efficiently in hardware.

The other approach worth considering is to store a couple of bits per pixel, stating if it's inside, outside or on the outline of the shape. This should compress well, and might be more efficient than lines for complex selections.

Take a look at curve interpolation - there's a few different types you can implement that will help smooth your curve. The more points you can get on that circle, the better. Storage is pretty cheap - so if extracting 360 close nodes is cheap enough (even at 8 bytes for position; 360 nodes is hardly expensive to store).

You can place with some interpolation samples here with only four points; and the results are quite good (my favourite is the Bezier for this case, although others might chime in about other effective solutions).

You can play around in here, too.

Not the answer you're looking for? Browse other questions tagged java android mathematics curves serialization or ask your own question.

15
What are the maths behind 'Raiden 2' purple laser?
7
How to create a curve from a set of points that passes through said points?
10
Points evenly spaced along a bezier curve
1
Way to deserialized or load last save state scene with GameObject and other classes instead of storing normal fields via binary format?
4
How can I find the distance from bezier curve anchor points to control points for a circle approximation and their positions
3
How to move bezier curve points along circle to form a symmetric curve at center
1
How to move points of a multi-segmented bezier curve to one side
0
Getting array of points shaping curve from 2 vector3 points