Did old games like Golden Axe or Street or Rage use tilemaps? [closed]

Ask Question
Asked 6 years, 11 months ago
Active 2 years, 8 months ago
Viewed 2k times
11
\$\begingroup\$
As it currently stands, this question is not a good fit for our Q&A format. We expect answers to be supported by facts, references, or expertise, but this question will likely solicit debate, arguments, polling, or extended discussion. If you feel that this question can be improved and possibly reopened, visit the help center for guidance.
Closed 6 years ago.

I am wondering if old games like Golden Axe (genesis) or street of Rage (genesis) used tilemaps or background bitmaps for the levels.

I could not find any resource that explain this and searching around in the web I can find background images, but I never found any tilemap for the levels. This off course, does not answer the question, but it looks like they used background bitmaps for the entire level.

But I am not sure if it was practical for those old consoles to store such "big" images and render those.

Does anyone knows a bit of programming on those old systems and knows how those "perspective" levels were built?

Yes, they use tilemaps (more precisely : small 8x8 hardware tiles). The main reason is that background scrolling and sprites display on most 16-bit consoles are hardware accelerated (there is a dedicated hardware chip for that, VDP in case of genesis). The only way to use that feature on genesis is to divide the background and sprites into small 8x8 tiles (even for displaying a single full screen logo).

Video memory (VRAM) was very expensive at that time and using small 8x8 tiles allow some tiles to be reused at different locations on the screen. Even if genesis can render games up to 320×480 resolution, there is not enough video memory (64KB) to hold a full frame.

Here is an example for Sonic (same goes for background) : 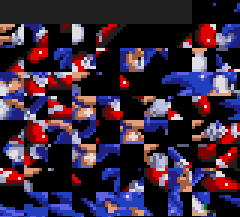 This main character is made using several 8x8 sprites, that stick together by moving on the screen at the same time. Same for background which is a 2D array of tiles.

Some consoles allow several layers of tiles (aka planes) to be displayed at the same time (maximum two for genesis). They usually have the same size (a little bigger than the screen) but can be scrolled independently. This is mostly used for parallax scrolling . These layers can give you the illusion that there is "huge bitmaps" moving on screen while they are actually independent layers of tiles.

Games of that age had to make use of very constrained memory. The Sega Genesis had only 64kb of video ram and only a few MB of ROM per game cartridge. They simply hadn't got the resources for large bitmaps. So they used tilemaps whenever possible and reserved large images for special occasions (boss fights or other memorable key areas of the game).

I would guess that they are using tile maps/sprite sheets for their textures, as you rightly guessed I think it was impracticable for them to use those large background images

I think you mean parallax scrolling http://en.wikipedia.org/wiki/Parallax_scrolling for "perspective" levels

Not the answer you're looking for? Browse other questions tagged tilemap or ask your own question.

2
Using tilemaps for an isometric football game with cocos2dx
10
Tile map/terrain implementation with differing heights of neighbouring tiles
1
textures in tilemap games: use 2d planes or 3d objects? (example with Dragons of Atlantis)
2
How do you use your own tileset in Tiled?
1
How big should my tiles be for tilemaps?
2
Use tilesets or a complete image?
4
Prevent tile layout gaps
0
How do you use these kind of rpg ground tileset ?
0
How can I do a Metroid like transition between two tilemaps with Monogame Extended?