DPad style movement for AI without using A*

What is the easiest way to implement DPad style movement (No diagonal) for AI without using and A* algorithm? I thought about having the enemy catch up to the player in the Y axis first then the X axis (or vice versa) but then it would be too easy to evade the enemy. If it matters I'm doing this in Objective-C using Cocos2d. Any input would be appreciated.

For Orthogonal movement, you can choose randomly between the two directions you need to go. 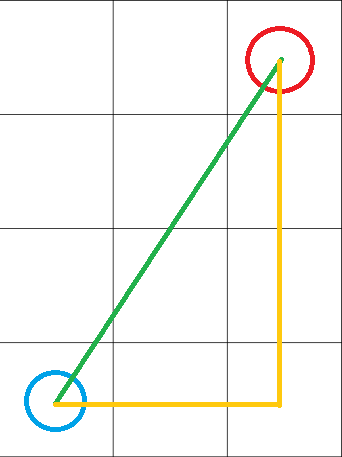 Otherwise, move in the longest direction first, then the shortest. If you're worried about the player being able to too easily avoid the enemy make the enemy move slightly more often than the player. Say 1.1 moves per the player's 1 move.

Not the answer you're looking for? Browse other questions tagged cocos2d-iphone ai movement objective-c or ask your own question.

13
How to implement an intelligent enemy in a shoot-em-up?
2
Non-random enemy movement implementation
0
Player sprite moving slower on iPhone 4
7
Implementing David Silver's Cooperative Pathfinding in Real-Time
0
Using versors for movement
1
Unity 2D - Pixel perfect movement using physics
0
How to design components for tile-based movement in an RPG using ECS
0
Moving an Enemy Toward the Player but only in cardinal+diagonal directions