How do I support animation with frames of different sizes?

I'm trying to create a simple top-view 2D rpg, in the style of Zelda and Secret of Mana, using PyGame. I've managed to make the beginnings of a game, with an animated character walking around. However, when I start animating attacks, I'm running into problems because the sprite with the sword slash is bigger than the walking sprite. This makes the character appear to be jumping around when attacking.

I managed to handle the problem by defining a center of gravity, so to speak, for each image, and apply a suitable offset at each frame in the animation to make the center of the character stay at the same place throughout the animation. I defined a dictionary of lists of images (instances of pygame.Surface), where I pick out the correct list by the state of the character, so for example there is one list for walking left, and then I loop over the list to get the animation. To handle the offset, I similarly created a dictionary of lists of offsets, looping over those in the same way.

However, I'm not entirely pleased with this implementation, so I'm looking for a more elegant solution.

I tried to add an attribute called offset to each instance of the pygame.Surface class, to hold the offset for each image, but the Surface class doesn't allow new attributes to be set. I then thought about subclassing pygame.Surface, which would allow me to set any attribute I wanted, but then I couldn't load my images with pygame.image.load without a lot of extra code.

I imagine everyone who makes a game with animations where the size of the sprite changes between frames would have to deal with this problem, so if anyone could suggest an elegant implementation, that would be great. If example code with PyGame is available, that would be even greater.

Imagine the worst case scenario, a fighting game where each moves' frames are different in size. Some kicks have an exceptionally far reach and some even further (think Dhalsim) 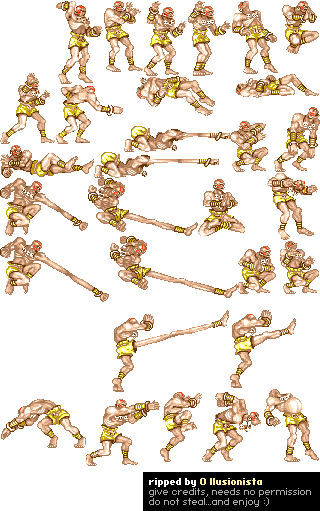 The bounding box may be very different in each frame and so are the frame's size and the relative position point. There is no mystic way to do it. Normally to handle complex sprites' animations, one of the teams' members uses a tool to define a bounding rectangle around each frame and place a relative positioning dot in each frame. This data is saved to an xml file often but is created with a specialized tool.

Not the answer you're looking for? Browse other questions tagged animation sprites pygame or ask your own question.

0
changing a sprite width when playing a reel using Crafty.js