Why no night sky with realistic star constellations?

As an amateur stargazer I noticed that many games which have night scenarios use textures for the night sky where the stars seem to be arranged entirely randomly. It seems like they were created by an artist from scratch without looking at a star chart. Why don't they use a night sky texture where the stars are arranged like on the real night sky, so you can make out well-known constellations?

Games which take place in a fantasy or science fiction scenario are obviously excused, but why do games which take place on earth spend so much work on realism, but neglect this one aspect, even though there are plenty of public domain resources which could be used to create a realistic night sky?

All the current answers are very good, but I want to propose a different point of view.

Even though I would say the vast majority of games don't get their stars right is out of straight laziness and/or ignorance. The same goes for firearm sounds, physics (ever played a racing game? any racing game?), history (for historical games) and many other fields.

However, if I were directing a game, I may not aim for realism in certain elements such as the star field, and I would do so intentionally, on aspects that are not crucial to gameplay.

So suppose I got a star chart for my game, and I use that as my skybox. Players who notice that, will then criticize that the stars are 3 degrees off, or that based on the vegetation you see in the game, you can estimate the latitude where the game is taking place, and that the star field doesn't correspond to such a latitude.

So even if I fix that, more players would then criticize that you can't see the ISS, or that some star has an apparent magnitude of 4.5, but in the game it looks like 4.8.

The point here is that, the more you aim for realism, the bigger your players' expectations will be. If your game requires realism in some aspect, then by all means dedicate your time and money to maximizing this realism. For all the rest, I would probably intentionally make it unrealistic, so I can keep my focus and that of my players in the parts of the game that actually matter.

Your question is based on the false assumption that most games are realistic. This is not the case, even if games take place in a familiar setting. Consider, for example, health regeneration in modern shooters.

Game developers that "spend so much work on realism" and aim for realism as a selling point are actually quite rare and are usually found in niche genres like aircraft or military sims.

An example is the Arma series games, based on VBS, which does have realistic star constellations (and basically everything else):

VBS2 is highly accurate in its rendering of seasonal patterns. Thus daylight hours, the sun's path across the sky, star constellations and moon phases are all simulated correctly given the current terrain's world location. Tides are also accurately simulated, and can be somewhat hard to predict as different seasons and moon phases create vastly differing high/low water marks.

VBS has these features because they are relevant to its users. For example, to train soldiers to navigate by starlight.

In short: most games are not accurate simulations of real-life. And if a feature costs money (and they all do) and does not add value (except to a handful of star gazers/gun nuts/medical professionals) it won't make the cut. This is why you won't see a lot of realistic nightskies/weapon reloading/gunshot wound treatment in games.

I'd just say memory restrictions: It's far easier to use a relatively small texture (either due to hardware restrictions or for performance reasons) and just repeat it over and over again instead of mapping the whole sky "as is" as long as it's no core gameplay element (and just decoration). This has been even more noticeable in old games, e.g. on consoles from the 80's or 90's where you usually had a very simple pattern (if any at all; i.e. 1-2 stars per tile only).

From time to time devs still tend to include some well known constellations just for people to notice them.

Two examples coming to my mind, first one being Illusion of Gaia (known as Illusion of Time in Europe), where the Cygnus constellation played a major role in the plot (the red "star" is meant to be a new star that appeared heralding things to come): 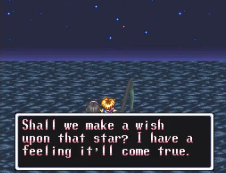 Another example would be Mega Man 2. There's one stage featuring stars in the background. They've added a very easily noticeable Ursa Major right before the end of the Crash Man stage: 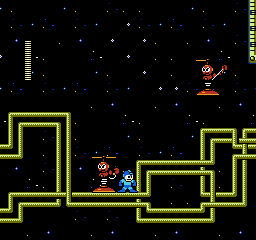 Reason number one: Laziness. It's much easier to just hit random noise on a texture and be done with it.

Reason number two: Artistic direction. Have you noticed how ludicrous the moon is on the night sky in the games that have it?

Reason number three: resources. Once you start to strive for realism in the night sky, you want a very, very high-resolution texture to pull it off. Having a lower-resolution texture, or using tiling tricks to get a higher resolution, makes it harder for the "realistic night sky" to look good while looking "right".

The simple answer is that to do a realistic night sky including constellations, you either need to use a lot of texture resolution, or a lot of geometry. Or both.

Most modern games want to spend their texture budget and rendering draw calls on things which impact directly on the play experience, which they know that every player is going to be focusing on for most of the time. Which means that the only games which typically spend a lot of time representing stars and constellations accurately are detailed space sims, where they can be important for navigation. (I expect that you'd see them in sailing sims, too, for the same reason)

You are talking about a different kind of realism here. When referring to games, "realism" usually means that when an object appears it looks like it's actually there. (Or given it's on a flat screen, perhaps a photograph is a better analogy?) The effect is usually obtained via high resolution textures and so on.

The realism you are referring to, however, is that an object exactly represents the corresponding real-world object. So if you have a brick wall with some mold on, by your definition it must only appear in exactly the way mold grows in real life. Or if the game is set in New York, every shop must be exactly what is in the real city, and every trash can and subway entrance must be in exactly the correct place.

As I'm sure you can understand, it's incredibly difficult to make every single detail like this accurate. Games just take a "good enough" approach. How many users are ever going to know that the stars are not correct? However, the sky is realistic by the usual definition, in the sense it looks like real stars and are not pink blobs in the sky.

One good reason is that most gamers don't go outdoors much. To check that the star display in a game is indeed authentic, they will probably Google it, ironically. So this is a waste of effort. It's also pointless in any game which portrays an imaginary world, only making sense in games or simulations which have real settings.

The focus in modern game graphics is realism, rather than authenticity, because realism is what enhances the sense of immersion into the game's world, whereas authenticity is more of an intellectual aspect.

Not the answer you're looking for? Browse other questions tagged graphics graphics-design sky .

3
Why am I having these weird framerate issues with OpenGL on Windows?
10
How can I create a "night sky" effect in OpenGL?
17
Why is my sky color calculation in Mathematica incorrect?
2
Why is there high performance hit with many meshes?
1
Why do asymmetric specular highlights appear in a scene with only ambient lighting in Unity?