Currently whilst making my game, I'm not sure how I am going to implement the actual gameplay/environment of it. At first I thought to do a side-on plat-former, where my character falls down the screen, from the side on. However, I think it would be much better gameplay (better gameplay mainly for mobile) to do this falling down in a birds eye view perspective.

What I want is my character to start at some arbitrary point in the world (say the sky) and fall down infinitely. Obviously, I don't actually have to make the character fall down, but I have to make it so that it looks like it is. Now I'm no artist, but how would an artist make art for the scrolling down background? Would he/she have to create sprites for the objects in the environment (i.e. clouds)?

Reference Image (sorry for the quality, and don't judge my lack of art skills): 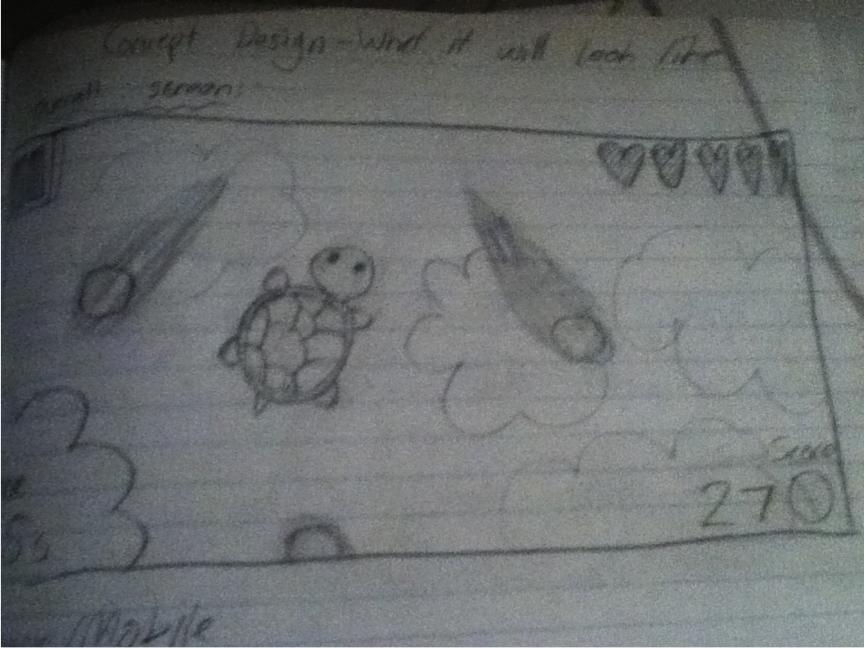 Now as you can see, my character (the turtle) is in the sky. I eventually want it to go past the clouds and look like it is going closer the ground. Now that I think about it, would it be better for this type of game to not actually transition the setting (i.e. keep one type of setting per game). What I mean is should I just keep the sky so the character never reaches the "bottom". 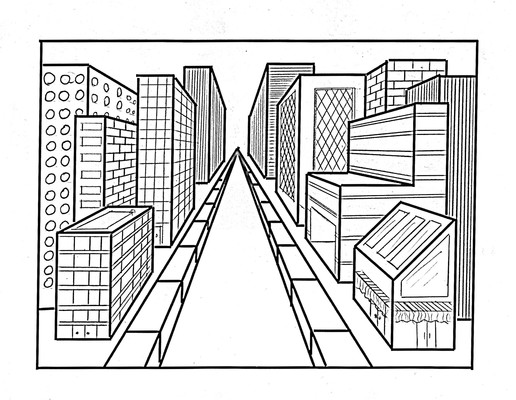 Note how the straight street appears to get smaller. Since the direction of the perspective is at the center of the screen, all the horizontal lines point towards the center of the perspective. The lines in this perspective will be the same as the travel paths for your objects as the player gets closer to them. Also note that the object displayed is as large as it's going to get, right before moving off screen and not being visible anymore.

See this question (and my answer) about simulating the movement of 2D objects toward the screen. Basically it's a scale operation in place of moving the object along the z axis.

The artistic style is up to you. You can have a far away ground that never gets closer or just have blue sky. That bit is just art related, it's not important to the implementation.

"Moving" the objects past the player is just an issue of scaling all the objects more and more the longer they're on screen. They should then pass outside of view along the edge of the screen once they've gotten to their full size. All of your objects will have some on screen path that matches the above image. Moving from somewhere near the center to which ever portion of the edge is closest to them. The scale will change from smallest when near the center to as large as the object is once it's almost done with it's path. See my other answer for details on how you might calculate the scale for an object depending on how long it'll be on screen.

If you would like to have almost 3D models in your game then you have to make it as a 2,5D. So you have to draw your spirtes as if you were looking at them from an angle (birdeye angle, like 45 degrees) then that is called isometric view. For the falling effect, you only have to move the offset of your spirtes by the height of the falling turtle.

And you can make the clouds at runtime dinamically or make the as sprites and load them.

For the absolute background, don't put anything, keep the eternal blue sky and just fill the scene with many white clouds, so it looks like these don't let you see the ground. This way, you can fall and fall without worrying if the ground is getting closer.

As for the sprites, just zoom them and move them to the outer spaces of the viewpoint so they look like they are coming closer. The problem with this kind of games, is that it is hard to know for the player when an object is close enough to hurt him; has happened to me many times with games alike.

If it is a scoring game, you better have to set an image for the ground and never change it. So that players can play undefinaly.

The falling effect would already be nice just with the clouds and the other objects zooming.

If you want them to have a time limit to finish the level, you better have to set an image and makeit scale/zoom while the timer is running.

You could just spawn the cloud sprites in random location, but really small and just make them bigger over time. Thereby giving the effect that the character is falling downwards (To put it another way, falling under the phone).

Regarding changing the background (ie. The ground). Don't modify it, although if it looks a little flat, I suppose you could shift the ground ever so slightly (just a little in a random direction). Just so that the ground moves as well. Just a thought.

Not the answer you're looking for? Browse other questions tagged game-design graphics art graphic-effects .

12
2D platformers: why make the physics dependent on the framerate?
1
Game software design
1
How to implement a birds eye view of 2D Grid Map using Android
3
Creating Animations Without Hardcore Art for 2D Action RPG
9
how can i make my game more intuitive without a tutorial?
47
If I design a game that has both guns and melee weapons, how do I make them equally viable?
24
How can I discourage players from attacking everything they encounter?