I am currently implementing a 2D skeleton system in C# with XNA, but got stuck in how I would rotate the bones around a skeleton's axis.

A basic algorithm that I have figured out already would involve, one part or another, manipulating the coordenates of the bone around the axis. I just cannot find the equation that would return these coordenates once provided an angle.

For example, if the bone's axis.X originally is -1 and its axis.Y -2 units away from the skeleton's axis' X and Y, then when the skeleton is rotated 90 degrees the X difference would become 2 and the Y, -1 (illustrated). 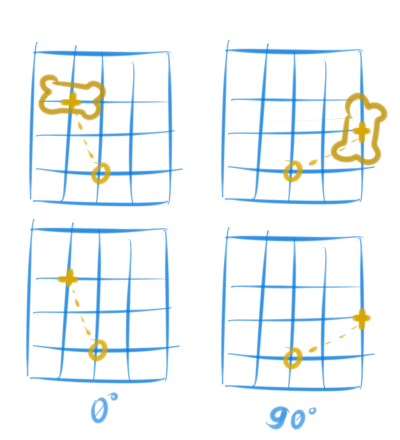 I'm certain the function I'm looking for would end something like this:

If there are already functions that do the job, then I wouldn't mind using them - I'm certain there's something in the Matrix class related to this, but I'm a bit overwhelmed by it. As much it really would be nice to learn how this whole deal rolls, the most important thing to me, simply, is to find a solution that works this way I intend.

You might be overcomplicating this a bit - plus this is something the different matrixes have been introduced for.

This is how I'd do this (don't calculate the rotation and stuff in software; it might be nice for a training exercise, but in the end let the graphics hardware do the math):

Once this is done, the bone should be rotated and where you want it to be.

What you're experiencing here is doing this in the wrong order (translating the bone first, then rotating), which just overcomplicates things a lot.

Assuming that your bone has Parent bone, Length and Rotation (not transformed), then:

Rotate is my extension method:

Note that you have to update parent before it's children.

Not the answer you're looking for? Browse other questions tagged xna c# rotation skeletal-animation or ask your own question.