What is a suitable input method to use for a 2D platformer on a touch device?

I am creating a 2d platformer game like Super Meat Boy in which precision of movement of my lead character matters. I am using libgdx. The keyboard controls on the PC work precisely, but when it comes to accelerometer handling, it's really hard to handle the character precisely. This worsens in stages with congested safe paths to escape. I thought of implementing an on-screen analog ball for handling input, but read a lot of bad consequences of that on the internet.

What is an intuitive but precise input method to use for platformer games on touch devices?

In a word: Swiping.

I played Pac-Man championship edition on my Android phone and what I thought really worked for it is that while there was an on screen joystick, you didn't actually have to touch it to move Pac-Man in the proper direction. If your finger fell off the joystick it didn't matter. All that mattered is in what direction you moved your finger.

To move up, swipe up. To move down, swipe down. To move left, swipe left. To move right, swipe right.

You could just as easily make swiping context sensitive to screen regions and actions currently happening within the game. Imagine your phone is in landscape mode and you are holding it like a video game controller. The left half of the screen could be reserved for movement using the swiping I describe above. The right half of the screen could be used for actions such as jumping, shooting, shielding, whatever game play abilities you want to give your player using swiping in a very similar fashion. Or if you only have one ability (like jumping in Super Meat Boy) - just treat the right half of the screen as a button.

We were discussing this in chat and it appeared that my solution, the way its described above is a lot like a virtual stick that moves when you lift up and place down your finger. I want to elaborate that this is not the case and is actually much more flexible than that. 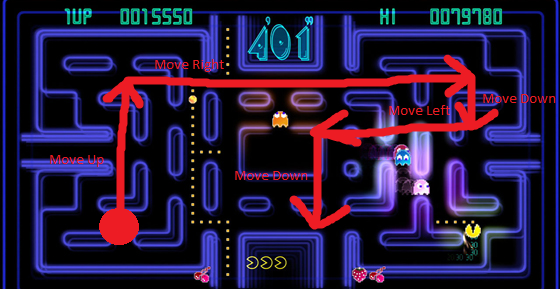 The image above shows the swiping pattern one could take to move Pacman around on the board. Note that the action that is taken is not at all based on where you place your finger down the first time. If you accidentally move your finger too far when swiping right or not enough when swiping down, its ok. With this implementation as long as you swiped far enough for it to register properly with the software it will take it and use where your finger ended up as the next starting point, or if you lift your finger off, it will use the next place you put your finger down.

As I said before, you could apply this to a platformer just by splitting controls into separate regions so that that your swipes and taps do different things depending on where on the screen you performed the action. The obvious route is make the left side handle movement just using swiping. Then the right side would be used to handle actions and abilities of the player using any combination of swipes and taps.

What if you treated a half of the screen like a virtual track ball where the position/speed of your character is directly tied to that of the ball? Swiping and releasing would set your character into constant motion (and cause the trackball to spin). Holding your finger on the screen would be like holding the trackball so that you could make small adjustments to your character's position, or stop your character from moving. I think this could work quite well for those frantic moments in Super Meat Boy where you're trying to run, jump, then stop on a dime. This would be an experimental approach because I haven't seen it done before, but anything is better than a virtual stick.

Edit: The Steam Controller handles their trackpad like a simulated trackball, but I haven't experimented enough to find a game that treats it like one.

I found side-of-screen touch and hold controls to be the most responsive.

RunRunRiot! is an example of this.

As for jumping, you could go for a mid-screen tap (using either hand).

The best input for a touch screen game I have found is on those really simple platform games when all you have to do is touch the screen to jump! Any game that uses the accelerometer for movement input to me is very disorienting!

This is a common dilemma when developing on a touch screen, if only there was a D-pad attachment that was popular. I think you will have to try your on screen ball idea.

Maybe you could have the left and right input on the far left and far right of the screen and have the up and down using the the higher or lower part of the left or right input. I think that makes sense?

You could consider having more precise controls for only when the player character is airborne.

For instance, if the right side of the screen controlled lateral direction, you could have the entirety of the left side be for the jump. Once airborne, the bottom left half of the screen could be 'descend' and the top half could be double jump.

Another option would be to adopt a jumping scheme like Jetpack Joyride or those "Cave" type games, where the longer you hold "up" the higher you go. It has the potential to be fairly precise and I think would work well with a Super Meat Boy type platformer, assuming the levels are designed appropriately.

Not the answer you're looking for? Browse other questions tagged 2d input touch multitouch .

5
Will multi-touch become an important/standard method of input for PC games in the future?
1
What is the best way to funnel input to the correct entities?
4
Do you prototype mobile touch games on the desktop with mouse input? What tricks do you use?
5
What perspective is suitable for sharing a screen across a table?
1
How can I use touch input for 3rd-person controls?
0
What is the best practice for handling touch events on different GameObjects in Unity2D?
1
Unity method/framework for handling different input modes
1
LibGdx Box2D Touch Input Movement