So I'm doing some DirectX development, using SharpDX under .NET to be exact (but DirectX/C++ API solutions are applicable). I'm looking for the fastest way to render lines in an orthogonal projection (e.g. simulating 2D line drawing for scientific apps) using DirectX.

A screenshot of the sorts of plots I'm trying to render follows:

It's not uncommon for these sorts of plots to have lines with millions of segments, of variable thickness, with or without antialiasing per-line (or full screen AA on/off). I need to update the vertices for the lines very frequently (e.g. 20 times/second) and offload as much to the GPU as possible.

So far I have tried:

For the 3rd method I'm using Vertex Buffers to send a triangle strip to the GPU and updating every 200ms with new vertices. I'm getting a refresh rate of around 5FPS for 100,000 line segments. I need millions ideally!

Now I'm thinking that the fastest way would be to do the tessellation on the GPU, e.g. in a Geometry Shader. I could send the vertices as a line-list or pack in a texture and unpack in a Geometry Shader to create the quads. Or, just send raw points to a pixel shader and implement Bresenham Line drawing entirely in a pixel shader. My HLSL is rusty, shader model 2 from 2006 so I don't know about the crazy stuff modern GPUs can do.

I have since implemented method (3) above using Geometry shaders using LineStrip and Dynamic Vertex Buffers. Now I'm getting 100FPS at 100k points and 10FPS at 1,000,000 points. This is a huge improvement but now I'm fill-rate and compute limited, so I got thinking about other techniques/ideas.

Your comments & suggestions much appreciated!

If you are going to render Y = f(X) graphs only, then I suggest trying the following method.

The curve data is passed as texture data, making it persistent, and allowing for partial updates through glTexSubImage2D for instance. If you need scrolling you could even implement a circular buffer and only update a few values per frame. Each curve is rendered as a fullscreen quad and all the work is done by the pixel shader.

The work of the pixel shader is as follows:

You may wish to substitute 4 with larger values depending on the potential zoom level.

I have written a very quick and dirty GLSL shader implementing this feature. I may add the HLSL version later, but you should be able to convert it without too much effort. The result can be seen below, with different line sizes and data densities: 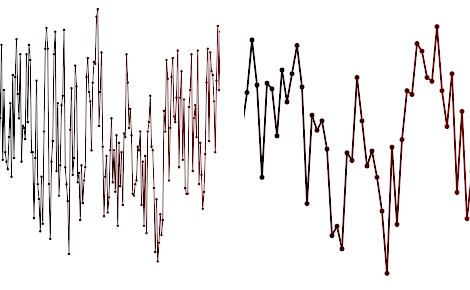 One clear advantage is that the amount of data transferred is very low, and the number of drawcalls is only one.

There was a GPU Gems chapter on rendering antialiased lines: Fast Prefiltered Lines. The basic idea is to render each line segment as a quad and calculate, at each pixel, a Gaussian function of the pixel center's distance from the line segment.

This does mean drawing each line segment in the graph as a separate quad, but in D3D11 you could certainly use a geometry shader and/or instancing to generate the quads, reducing the amount of data to be transferred to the GPU to just the data points themselves. I'd probably set up the data points as a StructuredBuffer to be read by the vertex / geometry shader, then do a draw call specifying the number of segments to be drawn. There wouldn't be any actual vertex buffers; the vertex shader would just use SV_VertexID or SV_InstanceID to determine which data points to look at.

Not the answer you're looking for? Browse other questions tagged 2d directx shaders .